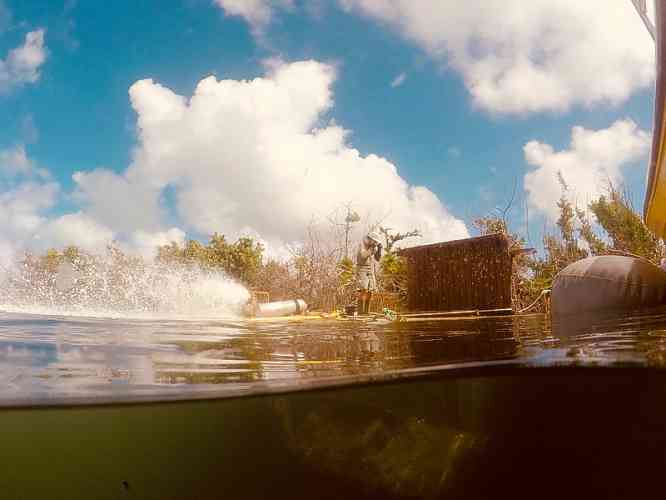 MULLET POND–A massive houseboat that sank after Hurricane Irma was removed from Mullet Pond on Wednesday.
With the help of dive company Atlantech Divers, Nature Foundation moved the houseboat to a location outside of the Ramsar site conservation zone.

“We are so very grateful to the team from Atlantech Divers – Jaco Pieterse and Mason Chadwick – for their assistance in removing the houseboat,” said Nature Foundation Manager Tadzio Bervoets.

The Foundation previously cleaned and restored sections of Mullet Pond as part of its environmental response post-Hurricanes Irma and Maria. However, the houseboat proved too much for the organisation’s limited resources.

Mullet Pond is listed as a wetland of international importance under the Ramsar Treaty. The Ramsar Convention, signed in Iran in 1971, is a global commitment to maintain the ecological character of global wetland areas, including in the wider Caribbean region.
Mullet Pond is a critical ecosystem for the island as it contains the last intact mangrove forest within Simpson Bay Lagoon. Unfortunately, the area was also illegally used in the storms as a protected anchorage and numerous boats sank.

The Foundation has had discussions with Government authorities about the placement of moorings outside of critical nature habitats so owners can still protect their vessels and at the same time protect sensitive natural areas.
“In particular the houseboat which illegally sought shelter in the area caused significant damage and we need to prevent this in the future,” said Bervoets.