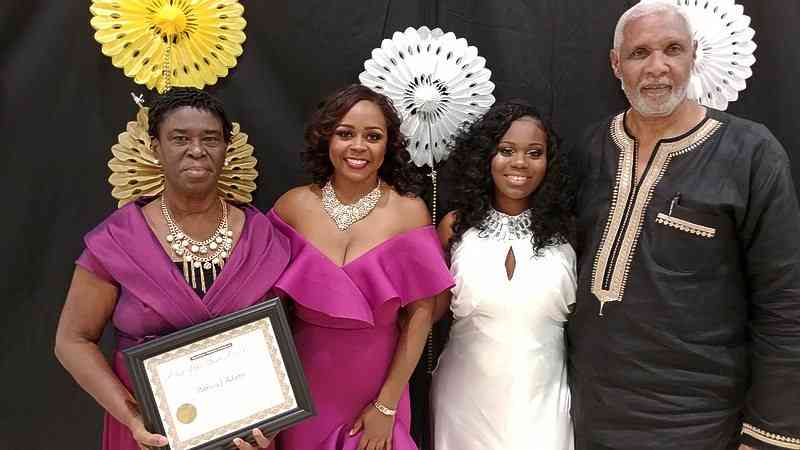 ANGUILLA–The Sunshine Theatre’s nineteenth annual awards banquet was held at the Royale Caribbean Resort in Little Bay, Anguilla, on February 10. A non-profit, privately owned, community-based cultural group owned and managed by Felix and Mona Fleming, the Sunshine Theatre has been providing cultural entertainment to the island since 1989, when it re-located from St. Thomas, US Virgin Islands, to Anguilla.

Award winners honoured were Kenn Banks, Patricia Adams, Shameica Hodge and Glennecia Samuel. Mistress of Ceremonies Farrah Banks stated that “the night was to honour and acknowledge the winners for their significant roles in the areas of arts, culture and community service.”

Artist of the Year was awarded to Patricia Adams, a beloved teacher, poet, song composer and published author. The Community Service Award, recognising an individual who gives their time, effort and talent to perpetuate the Anguillan cultural norm of helping each other whenever possible, was given to Kenn Banks. He has held leadership positions in numerous volunteer organisations, including the Anguilla Archaeological Society and the Anguilla National Trust.

The Theatre Arts Award honours persons selected exclusively for their work with the Sunshine Theatre, including on-stage, back-stage or any work supporting the theatre. The two award winners were Shameica Hodge, a practising attorney-at law who made her stage debut playing four different characters in the 2017 play production, “Pepper in Deir Soup,” and Glennecia Samuel, who has been involved in theatre since the age of six, and who also played three characters in the mentioned play.

When announcing the winners, Mona Fleming said they had been “singled out because of their extra-ordinary contributions to Anguilla’s arts, culture and community service.” She added that the Sunshine Theatre has pioneered these awards “to assist the theatre’s ongoing efforts to honour, inspire and include all Anguillans as partners in the wonderful world of arts and culture.”

Over 300 guests enjoyed an evening filled with entertainment, including singing, poetry, a short act from the play “Pepper in Deir Soup,” a thought-provoking keynote address from James L. Fleming, as well as a spectacular meal and music by DJ Sugar.