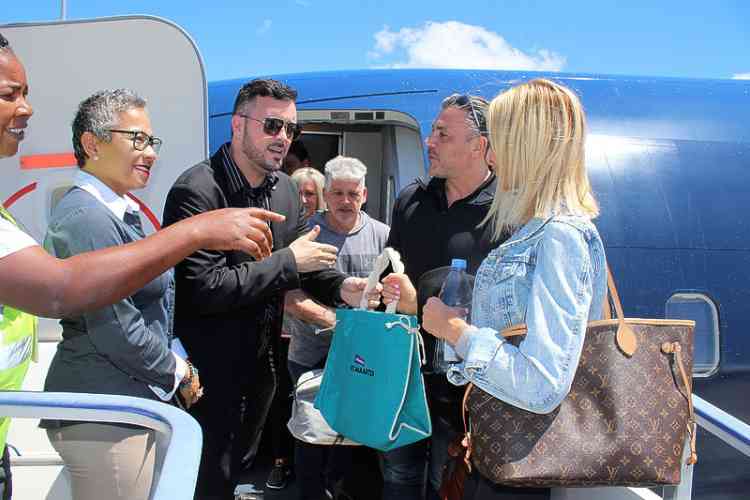 Minister of Tourism Stuart Johnson hands a bag of goodies to the first passenger to disembark the returning Sunwing flight on Thursday afternoon at Princess Juliana International Airport while Interim Director of St. Maarten Tourist Bureau May-Ling Chun looks on.

AIRPORT–The water cannons of the fire trucks at Princess Juliana International Airport showered Sunwing’s aircraft as it taxied off the runway during its first return flight to St. Maarten post-Irma on Thursday, at 12:40 pm.

On the tarmac awaiting the arrival of 189 passengers and crew were Tourism Minister Stuart Johnson, Interim Director of St. Maarten Tourist Bureau STB May-Ling Chun and staff members of STB along with local Sunwing ground handlers, who greeted the passengers as they disembarked.

Sunwing’s return was eagerly anticipated, as before Hurricanes Irma and Maria in September 2017, the airline was a major contributor to visitor arrivals bringing thousands of passengers to the island from Canada. “With Sonesta Maho Beach Resort and Sonesta Ocean Pointe Resorts as well as Divi Little Bay Beach Resort, Oyster Bay Beach Resort and many other resorts reopened, the returning of a major airline is a welcome addition.

It further strengthens our position that we are open for business, as several other airlines that have already returned or started new routes to St. Maarten,” said Johnson. The first passenger to disembark the Sunwing aircraft was greeted by Minister Johnson and STB Interim Director Chun. Johnson told the female passenger how pleased he was to welcome her and the other visitors to St. Maarten. He gave her a bag of “goodies” from STB as a token of St. Maarten’s appreciation for their visit.

Johnson said, “Our tourism product will evolve as it grows and our goal is to make it more sustainable. It will take some time, but the intention is to continue working to bring airlifts back to pre-Irma numbers and attract even more airlines.

One of the ways to show the strength of our destination is by highlighting each milestone as it gives the outer world a real and in-depth understanding of our commitment to the destination’s revitalisation and shows our progress. This is also an important step as we continue to work with potential investors who want to do business in St. Maarten.”

Sunwing returned with its first weekly flight and will resume its famed Toronto and Montreal weekly service flying the Boeing 737 800 aircraft with a capacity of 189 seats each.

According to Sunwing’s online publications, the company’s business model includes offering low-cost airlifts with scheduled flights from Toronto and Montreal in Canada and the United States to many destinations within the United States, Mexico, the Caribbean, Central and South America.