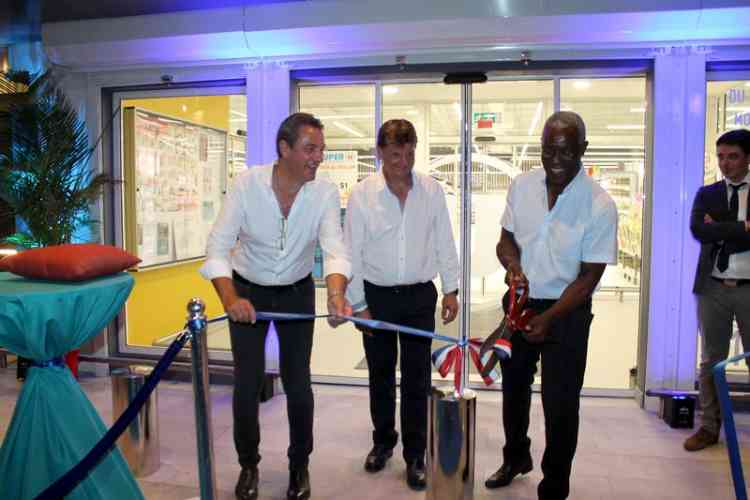 MARIGOT–The Super U in Hope Estate turned over its entire 300-space car park for a cocktail reception for the inauguration of the “mega” supermarket on Wednesday evening where many guests, elected officials and partners responsible for its realization gathered. The supermarket opened its doors to the public on June 18.

Directors Jean-Pierre Deguille and Philippe Loo gave a brief overview of the construction of the supermarket, noting 60 collaborators were involved and 40 new employees taken on. They said there were far too many contractors to thank in person for fear of missing someone out, but they mentioned their wives for putting up with the stress, long working hours and the architect and project supervisor who they said can “now sleep well, it’s open.”

All of the Collectivité Vice-Presidents were present covering for the absence of President Gibbs abroad for meetings with the French Overseas Minister Annick Girardin while Préfète Sylvie Feucher, also in meetings overseas, was represented by Préfecture’s Chef de Cabinet, Grégoire Pierre-Dessaux.

Vice-President of the Collectivité in charge of economic affairs Yawo Nyuiadzi thanked the Super U directors in particular for creating employment and bringing back vitality to the French side. Similar sentiments were expressed by Grégoire Pierre-Dessaux.

Vice-President of the Super U brand Denis Aubé, who had travelled to St. Martin especially for the inauguration praised Deguille and Loo for their “tenacity, solidarity and commitment “in being able to reopen the Super U in the Howell Center one month after Irma. He recalled the pair opened the Super U in 2013 which today has 80 employees. The Super U in Hope Estate was in the planning stages in 2016 but progress met a setback when Irma arrived in 2017.

Aubé said 90 per cent of the products available in St. Martin are from the Super U distribution system while 10 per cent are products sourced locally.

“We also have a strong presence in the French-speaking Africa and plan on opening 20 more supermarkets in the coming three years,” he disclosed.

He closed his remarks by saying: “Bravo to you Philippe and Jean-Pierre for this accomplishment and to your wives. I wish the entire team and employees much success.”

Vice-President Yawo Nyuiadzi was invited to cut the ribbon before guests were invited into the spacious supermarket to admire the immaculate displays and ultra-wide aisles.