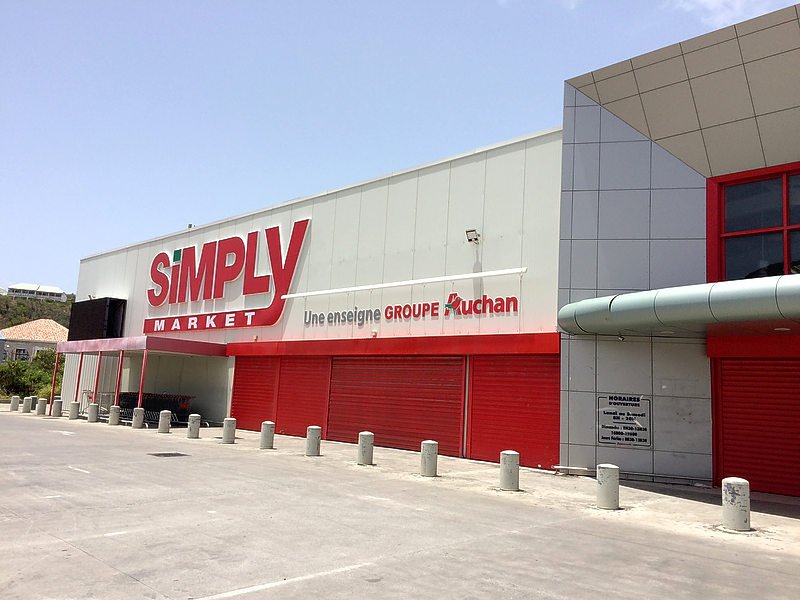 MARIGOT–Super U supermarket is poised to take over its former competitor Simply supermarket in Hope Estate, Grand Case, as the result of a merger between Super U and Auchan Group, the parent company of Simply.

The takeover is the first to be done in the French Caribbean since the merger.

Super U Managing Directors Jean-Pierre Deguille and Philippe Loo confirmed the joint venture to The Daily Herald on Monday. Simply supermarket in Sandy Ground, however, will remain as it is, as according to Deguille its smaller configuration does not fit the U concept and is too close to Howell Center.

The news will explain Simply’s recent closure in Hope Estate and the appearance of advertisements for a 50 per cent off liquidation sale on all priced items in the supermarket as well as a sale of all the fixtures and fittings.

Super U has purchased the Simply building and an adjoining piece of land to transform the former supermarket into a carbon copy, inside and out, of Super U in Howell Center, with additional parking.

The employees from Simply will all be retained and trained by Super U.

With the joining of the two companies, Hyper U’s (Super U’s big brother) becomes Auchan brand and Simply supermarkets change to Super U.

The shake-up of the big French supermarket chains means Super U/Auchan has now been shunted up to the number two spot in the French hierarchy of supermarket rankings. Super U used to be in fifth place.

As it stands today the ranking of the big four French supermarket chains is Intermarché with their casinos in the number one spot, Super U/Auchan number two, Carrefour in third place and Leclerc in fourth place; the latter previously holding the number one position.

“We expect to have even better purchasing power and cost prices with this merger to pass on to the consumer,” Deguille says. “Auchan is more a brand for the hyper supermarkets of 8,000, 10,000, or 12,000 square metres and Super U is a brand suited to smaller supermarkets, as we have here, of 3,000 or 4,000 square metres.

“Auchan has fewer supermarkets but they are very big ones whereas Super U has more supermarkets but smaller ones. We can go as small as the U Express in St. Barths. But for us it is better to have a medium size supermarket with a high turnover than a bigger operation and less turnover.”

Deguille and Loo could not say when they expected the supermarket to reopen as building work to modify it will take a few months.

Despite propositions to do business on the Dutch side the pair say they are not ruling anything out but at the moment they have responsibility to the French market first before considering anything over the border.

“When we started three years ago we dropped our prices by 30 per cent but it’s not just about prices,” Deguilles insists. “We want to keep on improving service and employing good staff who are friendly and well trained, to give the customers a consistently good experience.”

The demise of Simply in Hope Estate will be attributed to the popularity of Super U though Deguille suggests the Simply owner wanted to sell for several reasons.

Asked about the almost forgotten project for a Hyper U and shopping mall in La Savane, Loo said the project is still moving forward, albeit slowly, and is now being driven entirely by Super U with no other outside parties.

“The main problem we have at the moment is authorisation for an access road and a roundabout,” Loo explained.

“You cannot open a supermarket just like that, you need authorisation from Government and it gets tougher and tougher,” Deguilles adds. “Everybody has to agree. Big projects need to have good access. If we get the roundabout we can advance on the project.”

The former plans and concept for the shopping mall are no longer valid.

“We have taken over everything from A to Z,” Loo discloses. “The shopping mall and Hyper U will be operated by us. We will have fewer shops than the previous plan had, but bigger ones.”

Source: Daily Herald
Super U to take over Simply Supermarket in Hope Estate