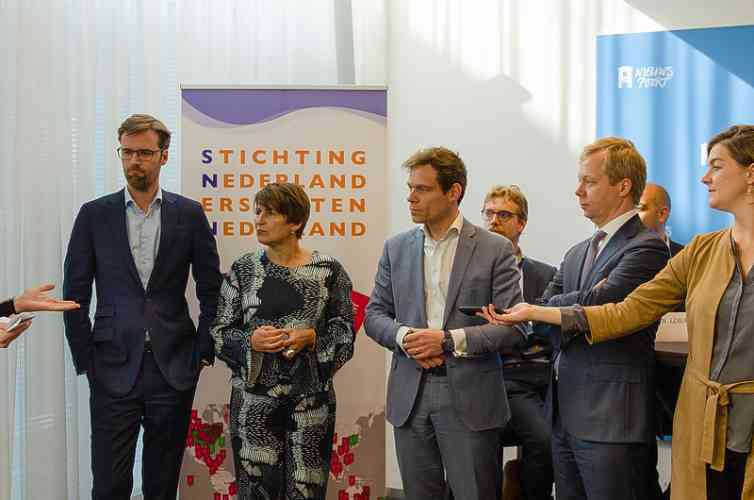 Various Members of the Second Chamber of the Dutch Parliament attended the official presentation of new Foundation for Dutch Nationals Outside the Netherlands, including Sven Koopmans (second from right) of the VVD party, Martijn van Helvert (centre) of the CDA party, Sjoerd Sjoerdsma (left) of the D66 party and Lillianne Ploumen (second from left) of the PvdA party.

THE HAGUE–Members of the Second Chamber of the Dutch Parliament expressed support for the cause of the new Foundation for Dutch Nationals Outside the Netherlands (“Stichting Nederlanders Buiten Nederland” (SNBN)) during the latter’s official presentation in The Hague on Thursday.

The foundation has one main objective: to serve the interests of Dutch nationals living abroad. There is no exact figure, but it estimated that this group numbers around one million.

“This is the formalisation of what we have been doing for a while, which is looking out for the interest of Dutch nationals abroad,” said SNBN Chairman Eelco Keij, introducing the foundation’s board, which consists of 11 persons living all over the world. A number of board members attended Thursday’s official event.

Dutch nationals abroad face multiple issues, often of a logistic nature. Issues range from being able to use the DigiD identity to electronically communicate with the Dutch government and for the renewal of passports, to arranging an old age pension AOW and (the possibility of) losing the Dutch citizenship.

Several thousand Dutch people have lost their Dutch nationality in the past few years, often without their knowledge, and without a possibility to appeal this decision. The National Ombudsman has expressed criticism about this decision of the Dutch government.

Keij remarked that nowadays many of the Dutch nationals who go to live and work abroad only leave the Netherlands for a couple of years, unlike in the past when people migrated and mostly did not return. “Many leave for a limited period. They fly up and down a lot and they keep in touch with the Netherlands.”

MP Sjoerd Sjoerdsma (D66) said the Dutch nationals abroad served as “ambassadors” and that as such, the Netherlands should be proud of this group and support them. “Although they are, they should not be forgotten,” he said. He said steps had been taken to improve government services for those living abroad, but there was still a lot of room for improvement.

MPs Martijn van Helvert (CDA) and Sven Koopmans (VVD) agreed that the legislation to restrict double nationalities for foreigners who come to the Netherlands adversely affects Dutch citizens abroad who lose their Dutch nationality when they take on a second nationality in the new country where they live and work.

“We are making very strict legislation for foreigners who come to the Netherlands and who may want to take advantage of their double nationality, because they have their Dutch nationality and also the one of their original country of birth. At the same time, this strict legislation has an adverse effect on Dutch citizens living abroad who need a nationality in another country for their work,” said Van Helvert.

Koopmans said one should also be realistic. “We have to limit the number of residents in the Netherlands with double nationality, but that should not be at the expense of our Dutch nationals abroad who are still connected to the Netherlands and have clear ties with our country.”

Van Helvert said it was not correct that Dutch nationals abroad lost their Dutch citizenship, often without their knowledge, in the system that was basically implemented for foreigners who lived in the Netherlands with a dual nationality. He said he was willing to look at the law proposal tabled by D66 and PvdA to allow Dutch citizens living abroad to keep their Dutch nationality.

MP Lilianne Ploumen (PvdA) and the other MPs present applauded the initiative to establish a foundation that lobbied for the interests of Dutch nationals abroad. “I am all for. Don’t hesitate to approach us, and to keep us informed,” said Ploumen.