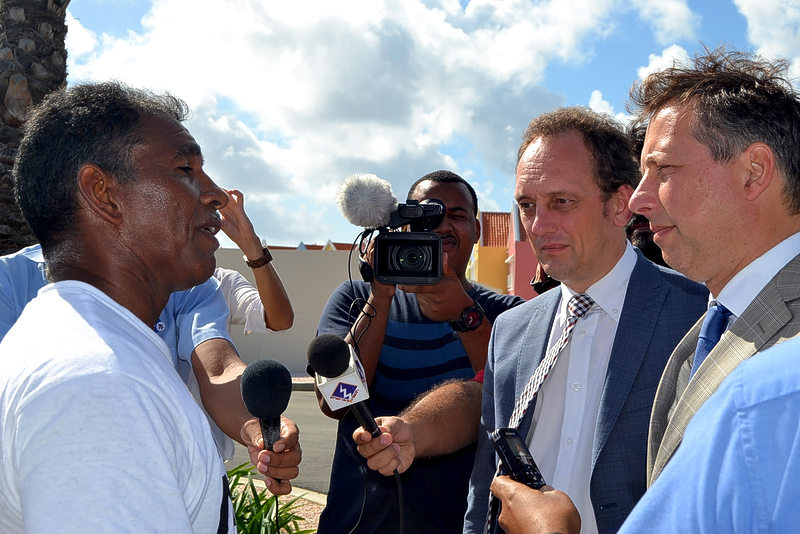 KRALENDIJK/THE HAGUE–The Dutch Parliament delegation that took part in the Caribbean Netherlands summit in Bonaire on Monday is supportive of setting up a special provision for persons in Bonaire, St. Eustatius and Saba who require special assistance.

The Netherlands has such an arrangement called the Social Support Law (“Wet maatschappelijke ondersteuning” Wmo). The Wmo, carried out by the municipalities, provides support, financial and material, to persons with a disability or in social need. The Caribbean Netherlands don’t have a Wmo.

“The question is whether it was wise to exclude the islands from the Wmo. We have to look into how we can set up a similar structure for the islands that brings the tailor-made that is needed here. This is something new that we can take along,” said Recourt.

Poverty was the main theme of Monday’s summit, which, aside from the Dutch delegation, was attended by representatives of the Executive Councils of Bonaire and Saba. St. Eustatius was unable to travel to Bonaire due to financial restrictions and the fact that the island doesn’t have an approved 2017 budget as yet. Bonaire Commissioner Nina den Heyer made a presentation on Statia’s behalf.

Recourt stated at the press conference that it was highly important to hear first-hand what is happening on the islands. “We need information in order to perform our duty to check the Dutch Government. We need to know where things are not going well, or where there is friction. We can then tell our Minister where the actions need to be taken,” he said.

There is much room for improvement in the efforts to alleviate poverty in Bonaire, St. Eustatius and Saba, all participants at the summit agreed. Poverty should be combated using every available avenue, was the general consensus.

“We have made long lists of items which we think should be improved and done differently. We will take those back to the Netherlands for us to work with in the First and Second Chamber, so that next time when we are here, we can say that steps have been taken,” said Recourt at the press conference.

The delegations also shared the same view regarding the establishing of a social minimum which covers the high cost of living on the three islands. The Dutch Parliament has been clamouring for setting a decent social minimum to ensure that people with lower incomes can financially sustain themselves. Emphasising the support of the Dutch Parliament in this matter, Recourt said that it was important that the Dutch Government takes concrete steps to establish this social minimum. In a meeting with the First Chamber in November last year, State Secretary of Social Affairs and Labour Jetta Klijnsma promised to come with a plan before March 2017.

“The income of people is really too low to have a decent life, and the poverty is too high. You cannot live off social security (“onderstand”) and also not off the minimum wage. We have said this over and over in Parliament. The Dutch Government is slowly moving on this issue and we will again be pushing to get it done,” said Recourt.

Bonaire Commissioner Den Heyer, in charge of the organisation of the summit, expressed her satisfaction on the outcome of Monday’s conference, which confirmed that all three public entities share the same problems in the area of poverty. “There has been progress in a number of areas, but steps still have to be taken to combat poverty, a crucial area that truly affects the people. Sometimes courage is needed to take those steps,” she said.

Towards the end of the summit, a small group of protestors appeared outside the Courtyard Marriott Hotel where the meeting and press conference took place. The group was led by James Finies of the Nos Ke Boneiru Bèk, an organisation that strives for more autonomy and opposes a public entity status for Bonaire and St. Eustatius.

Recourt and deputy delegation leader Member of the First Chamber Ruard Ganzevoort of the green left party GroenLinks went outside to speak with Finies and his group and to receive a protest letter. In that letter, Nos Ke Boneiru Bèk criticised the Dutch Government, and by extension the Dutch Parliament, of violating the rights of the people of the two islands.

Finies and his group promote passive non-violent resistance, but want The Hague to stop the embedding of Bonaire and St. Eustatius in the Dutch Constitution, and to “respect and restore the rule of law and democracy” on the islands. The group called for the respecting and protection of the right to self-determination and basic human rights.