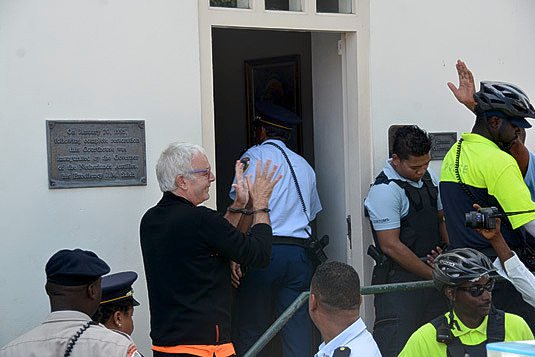 PHILIPSBURG–Workers and supporters of businessman Francesco Corallo came out in full force on Tuesday afternoon for his long awaited extradition hearing at the Court House.

Slogans such as “Free Corallo” were shouted by protestors who demanded the release of the Atlantis Group owner. Workers in their uniforms told the Daily Herald that their boss has been in prison already for 150 days. “This is inhumane,” said a worker, who was concerned about the priorities of the Prosecutor’s Office.

The Anti-corruption Taskforce (TBO) of the Kingdom Detectives Cooperation Team (RST) arrested Corallo at the request of Italian authorities last year. The Prosecutor’s Office has stated on numerous occasions that Corallo will be prosecuted in Italy for amongst other things, tax evasion and bribery of several politicians.

The Italy-born Corallo is also suspected in Italy for using his businesses for money-laundering.