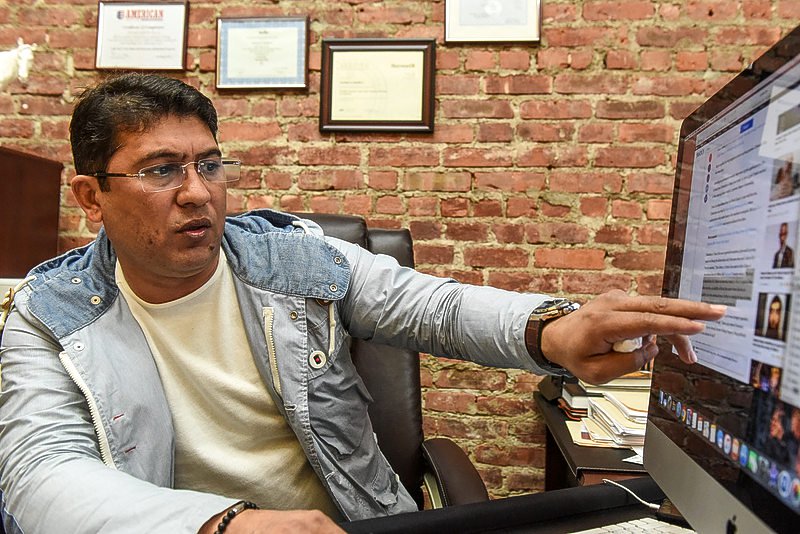 MOSCOW/ALMATY- – Pushed by a lack of jobs and strict control of behaviour and dissent, millions of Uzbeks have emigrated in recent years. Hundreds of those joined Islamic State in the Middle East, while others turned to religious extremism in their host countries.

Sayfullo Saipov, the Uzbek immigrant accused of killing eight people in a truck attack in New York on Tuesday, appears to have taken the latter path, becoming radicalised after struggling with life in the West.
According to U.S. police, the 29-year-old followed online instructions from Islamic State before launching the assault.
Saipov’s was at least the fourth deadly attack abroad by an Uzbek national or ethnic Uzbek this year, and his actions have highlighted the outsized influence the Central Asian state of 32 million people has had on global jihad in recent months.
“These things take time to prepare and what we’re seeing today is a result of work that has been done over the last few years (by Islamic State and similar groups),” said Kazakhstan-based Central Asia analyst Alexander Knyazev.
People who follow Uzbekistan closely say that, based on what is known so far of Saipov, he appears to be one of “a forgotten generation” of Uzbek men who left the former Soviet republic for a better life bereft of a proper religious education and unequipped to navigate the West.
That, and the common difficulty of assimilating into a foreign country and culture, may have left him susceptible to extremist influences when times got tough.
“He became religious on the spur of the moment,” Mirrakhmat Muminov, a truck driver and Uzbek community activist who lives in Stow, Ohio, and knew Saipov, told Reuters by telephone. He said Saipov had previously lived in Tashkent, the Uzbek capital.
“He started studying religion in the United States,” said Muminov, adding that Saipov “couldn’t get enough” of the religious freedoms enjoyed in the United States after living in the strict confines of Uzbekistan.
Islam is widely practised in predominately Muslim Uzbekistan, but worship is tightly controlled by a government wary of radicalism.
Ruled with an iron fist for more than two decades by former Communist Party boss Islam Karimov, who died last year, Uzbekistan has long said its tough religion policy is justified by national security concerns.
Under his successor Shavkat Mirziyoyev, who took office at the end of 2016, the authorities have started to signal a more tolerant approach, and there are hopes that economic reforms will begin to free up the command economy.
Mirziyoyev said in September that Uzbekistan had removed about 16,000 people from a 17,000-strong security blacklist of potential Muslim religious extremists and wanted “to bring them into our society and educate them.”
Whether such changes reduce the risk of flight or radicalisation remains to be seen, and come too late for Saipov and others.
Many Uzbeks have fled only to later despair of becoming bottom dollar labourers or unemployed in the West or Russia. It is at that point that some have turned to radical Islam.
Speaking from Tashkent, Steve Swerdlow, a researcher for Human Rights Watch in Central Asia, said around 5 million Uzbeks had emigrated to Russia in recent years, with others like Saipov trying their luck in the West.
“The radicalisation process takes place outside Uzbekistan,” said Swerdlow, who added that the country has one of the worst human rights records in the world and does not tolerate dissent.
“They are often individuals who are far from home, who are marginalised and who are experiencing some kind of dislocation from their community and social network.”
With security inside the country, part of the Soviet Union until the bloc collapsed in 1991, so tight, it is not thought to have suffered an Islamist attack since 2004 when suicide bombers attacked the U.S. and Israeli embassies in Tashkent.
Yet deadly ethnic tensions occasionally flare up in the Ferghana Valley, a fertile region spanning areas of Uzbekistan, Kyrgyzstan and Tajikistan. In 2010, dozens of people were killed in ethnic clashes in the Kyrgyz part of the Valley.
A security source in Kyrgyzstan told Reuters that Saipov had also lived there, receiving temporary identity papers in the town of Uzgen, in the Ferghana Valley, in 2004.
A statement from Uzbekistan’s U.S. embassy said Saipov moved to America in 2010 having won a green card visa lottery. Mirziyoyev said his government would do all it could to help investigate the “extremely brutal” attack.
Before this week’s attack, an Uzbek gunman burst into a nightclub in the Turkish city of Istanbul and killed 39 people on New Year’s Day.
In April, an ethnic Uzbek man born in Kyrgyzstan blew up a metro train in the Russian city of St Petersburg, killing at least 14 people, and the same month an Uzbek man rammed a truck into a crowd in Stockholm, killing four people.
Uzbek men have also swollen the ranks of Islamic State in Syria and Iraq.
According to a report from the Soufan Center last month, more than 1,500 Uzbeks have joined the extremist group in the Middle East, the highest number of all five Central Asian countries, all of which have provided recruits.
The number of fighters from Uzbekistan is smaller than that for countries like Russia and Saudi Arabia, the same report showed, but still remains statistically significant.
Paul Stronski, a senior fellow at the Carnegie Endowment for International Peace, a Washington think-tank, and former National Security Council staffer during the Obama administration, said radicalism among migrants from Uzbekistan, the most populous country in Central Asia with a long border with Afghanistan, could grow as more people leave to find work.
“We haven’t seen many extremist problems in Uzbekistan because of the lack of space and the fact that it’s all been pushed underground,” Stronski said.
“The problem is manageable in the region. It’s becoming a bigger problem outside the region.”