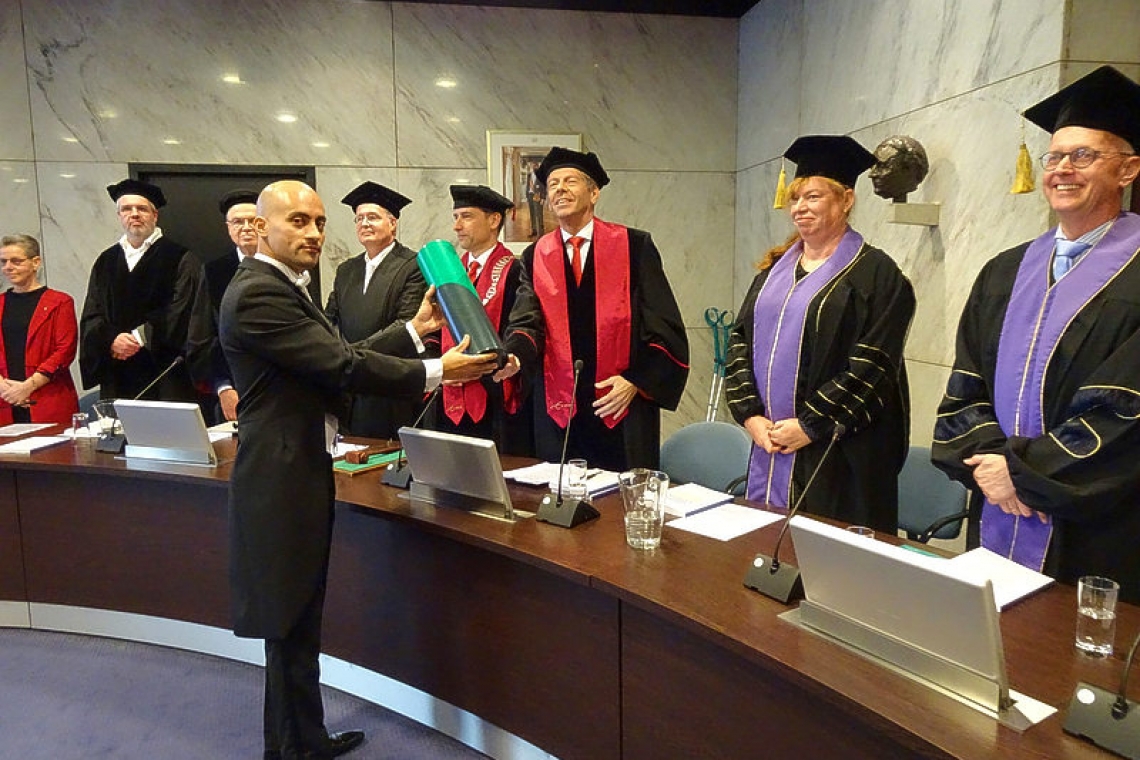 ROTTERDAM–There has been more attention for good governance and interventions since the new constitutional relations went into effect in the Kingdom, while the governors of the Dutch Caribbean countries have been put in a difficult position. In all this, the Kingdom government has not always been tactful. “Article 15 of the Regulation of the Governor is not meant for interventions in the government of the Dutch Caribbean countries.”

Attorney-at-law and lecturer Dr. Aubrich Bakhuis arrived at these conclusions in his thesis titled “Autonomy, supervision and intervention in the Caribbean countries of the Kingdom” which he promoted at Erasmus University Rotterdam last Friday.

In front of a large number of guests, Bakhuis defended his thesis and answered complex questions by the committee, which included Professors Ernst Hirsch Ballin, Arjan van Rijn, Gerhard Hoogers, Frank Kunneman, Lodewijk Rogier and Flora Goudappel, after which he was awarded his doctorate degree and received his doctorate certificate.

It was a long road for Bakhuis, who started working on his promotion in 2011 and in the meantime maintained his job as lawyer at the law firm VanEps Kunneman VanDoorne in Curaçao.

In his thesis, Bakhuis went into detail about the most important supervision and intervention tools of the Kingdom. He assessed eight cases of intervention between 2012 and 2019. The instruments the Kingdom government has, based on the Charter, are mainly based on the authority the Dutch government has to supervise the provinces and municipalities in the Netherlands, such as the authority to annul a decision or give an instruction, as well as the neglect of tasks regulation.

However, there are some differences. In the Caribbean countries, the governors have specific tasks in executing the laws of the Kingdom. The countries are subject to financial supervision, and through the Financial Supervision Kingdom Law, the countries’ budget right has become a Kingdom affair.

The Governors of Aruba, Curaçao and St. Maarten play a crucial role in the execution of the Kingdom laws and the securing of good governance. Actions by the governors, including the refusal to sign a national decree and sending draft regulation to The Hague for annulment by the Kingdom Council of Ministers, can prevent “drastic measures” that deeply intervene in the autonomy of the Dutch Caribbean countries.

That autonomy, Bakhuis concluded, should at least consist of three things: the active and passive voting right for the Parliament, financial autonomy, and taking charge of one’s own affairs. “Autonomy is a great good. But it has also been a source of much discussion and a hot topic for many years. Autonomy boils down to being the boss in your own home, having your own Parliament, your own independently functioning government, having your own Constitution. With that freedom also comes great responsibility. You have to take the bigger entity into account when you are part of it.”

In Bakhuis’ opinion, the position of the Governor can be damaged if he or she is deployed in the Kingdom guarantee function. “This especially counts for the instructions that have been given to the Governor. And, even though the intervention in some cases proved to be right, the goal does not justify all means.”

According to Bakhuis, the use of “execute supervision and intervention” in the Dutch Caribbean islands will remain problematic and a source of discussion as long as there is no possibility for the overseas countries to put their disagreement with the Kingdom government to an independent body.

Ideally, this body should be a court with a binding ruling, not a ruling from which the Kingdom Council of Ministers can deviate, as is the case in the current law proposal to stablish a Dispute Regulation for the Kingdom.

Bakhuis reiterated that when the Kingdom Charter was proclaimed in 1954, autonomy was placed first, while intervention and the guarantee function by the Kingdom government was considered to be a last resort, an “ultimate remedy”.

“In the past 10 years, intervention has taken place in the Caribbean countries a number of times, through lighter and heavier measures in order to preserve good governance. Whether this was justified or not, it ultimately is about whether the Kingdom government sticks to the rules of the game in executing the guarantee function. And, that has not always been sufficiently clear,” he stated.

He said the Dutch Caribbean countries are right to feel unjustly treated when they are overruled in the Kingdom Council of Ministers because of the minority position they hold in this Council.

Bakhuis came to the conclusion in his thesis that the temporary “upgrading” of responsibilities or the authority of a Dutch Caribbean country to the level of the Kingdom in practice results in permanent supervision by the Kingdom government.

In his opinion too, consensus between the Kingdom partners needs to be secured in an agreement, and not in a Kingdom law without a horizon clause with a forceful authority for the Kingdom government.

Furthermore, the financial management of the Curaçao government is not a part of the assessment framework of the Kingdom Law Financial Supervision, and as such this is not a justifiable reason to prolong the financial supervision.