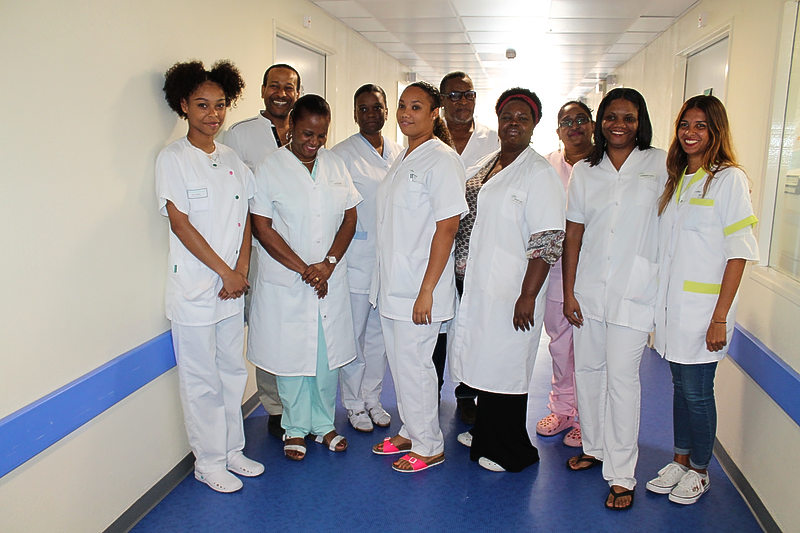 MARIGOT–The Louis-Constant Fleming Hospital recently re-opened its surgical ward as part of extensive renovations and reorganisation of wards at the hospital following the fire of May 8, 2016. The fire was caused by an electrical fault in a refrigerator in the medicine ward, forcing an evacuation of patients to other wards without any injury or loss of life.

Although that renovated ward was not shown to reporters, the fire led management to review the protocols for fire prevention in addition to taking the opportunity to reorganise the wards for optimum efficiency and patient care.

Interim Manager and Financial Director of the hospital, Hervé Magott and Head of the Medical Commission, Dr. Louis Jeffry, explained approximately 900,000 euros has been spent on renovations and reorganising over the past year with minimal disruption to patients. Renovation work will shortly be finished in maternity and paediatrics.

“The surgical ward is one of the most important wards in the hospital,” said Jeffry. “The department is composed of surgery, anaesthesia, maternity, gynaecology, and paediatric wards. The surgical ward is one of the busiest wards, employing most of the personnel and resources. About 140 staff [members – Ed.] work in the whole department. The surgery ward has 17 beds but we have six extra beds and ambulatory services for the same-day hospital service.

“It was important for us to publicise this official re-opening. We have a very dynamic ward, it is ambitious in its operation, very conscious of the context we are living in and the possibilities that we have,” Jeffry added. “We are promoting services here such as orthopaedic surgery, urology and urology surgery, eye, nose and throat (ENT) and ophthalmology services. It’s a very diverse department and we want it to serve in the best interests of the population of French and Dutch sides.

“We’ve also been working with the St. Maarten Medical Center on the Dutch side in various areas of cooperation and surgery. So for us this has been an opportunity to promote and develop our services. Orthopaedic surgery here specialises in upper and lower limbs, and wound management, and hand surgery is also available. For orthopaedic surgery we have a team of five; two in-house surgeons and three visiting surgeons. Urology is another service as prostate function is an issue for many people.”

Jeffry said the fire of last year had been “a wake-up call” for the hospital not only in terms of security but also of management and organisation.