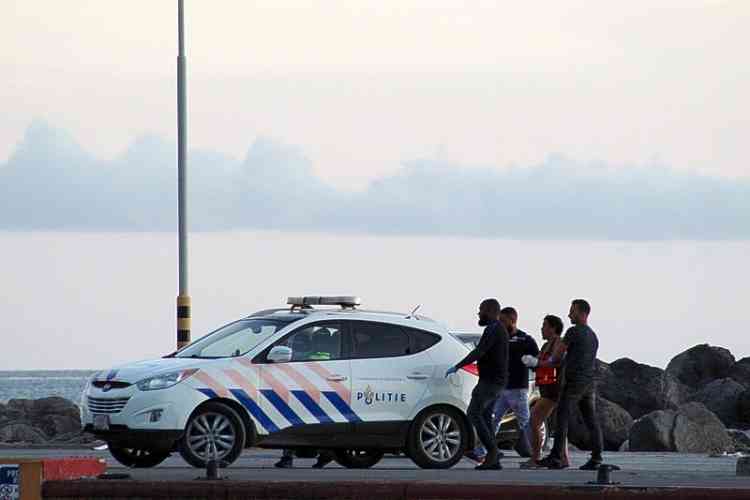 Police officials escorting suspect R.C.B. (second right) from the Philippines to a waiting police vehicle at Charles A. Woodley pier in St. Eustatius on Friday, September 6.

ST. EUSTATIUS–A fight and stabbing in the mess hall of Italian crude oil tanker RBD Gino Ferretti which resulted in two deaths is currently under investigation by the Police Force Caribbean Netherlands KPCN.

The police said Friday that the remains of two people had been found on Thursday, September 5, on board the tanker which was en route from Brazil to St. Eustatius. While still on the way to Statia the captain had reported the incident on board his ship, the police said.

The bodies that were found are those of two men from the Philippines ages 33 and 42 years. The police suspect a crime and arrested R.C.B. (43), who also has Filipino nationality. KPCN is investigating the case.

The two victims have been identified as Q.L.Q. and R.J.J. Their bodies were taken off the tanker and transported by a Dutch Caribbean Coast Guard vessel.

Detectives and other police officials travelled to Statia to assist with the investigation.

On Thursday and Friday, an Italian judge reviewed the request from the Dutch government to allow the suspect to be taken from the tanker into the custody of KPCN.

The requested permission apparently was given, as the suspect was taken to Charles A. Woodley pier in Statia’s harbour late Friday afternoon.

The suspect was escorted by KPCN officials on board a line boat. On his arrival in Statia he was taken to a waiting police vehicle, which sped away with lights flashing and the siren blaring.

The fatal stabbing did not take place near Statia, but in international waters while the vessel was on its way from Brazil to Statia.

This was the second fatal incident on board a tanker in one week’s time. On Saturday, August 31, A.S.C. (58) from Guyana was found on board tanker Georgina PJ without showing any signs of life. He had collapsed in the ship’s kitchen. Cardiopulmonary resuscitation (CPR) was administered and at 7:10am the ship called to shore to report an emergency.

The victim was brought to Charles A. Woodley pier where emergency personnel continued CPR, but to no avail. The man was pronounced dead by 7:40am.

Based on police investigations and forensic examinations of the body it was concluded there were no indications of foul play.