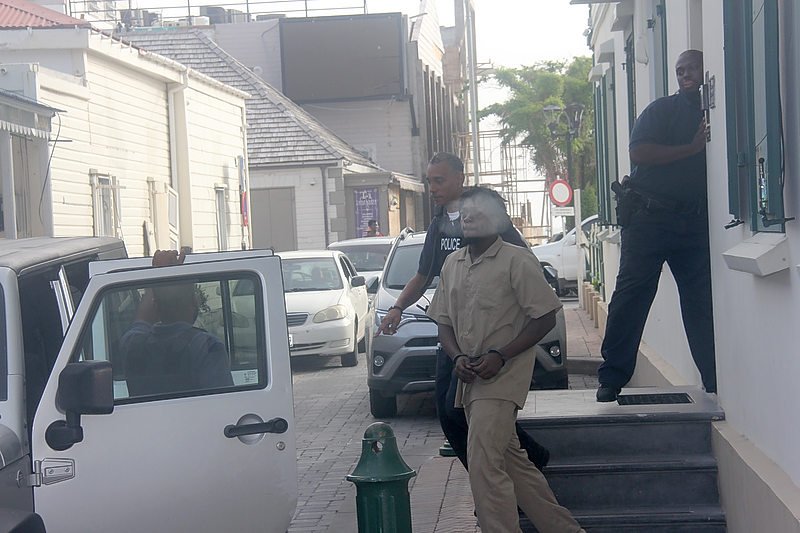 PHILIPSBURG–The Prosecutor’s Office on Wednesday called for a nine-year prison sentence for defendant K.P. (25), who is accused of involvement in eleven supermarket robberies and of the illegal possession of a firearm. The suspect, who denied the charges, will learn his fate November 8.

P., who on March 2 was sentenced to 36 months for the role he played in the armed robbery at Budget Marine on Waterfront Road on October 19, 2016, was now confronted with the accusation of having committed 11 other armed robberies between July 27, and October 18, 2016.
The Prosecutor said that P., in fact was suspected of having committed no fewer than 29 robberies, but only 11 were mentioned in the indictment.
All armed robberies were committed in 2016. These concern Old Tree Peking Seafood restaurant (July 27); Wang Jiao supermarket (August 13); Fresh Pond supermarket (August 15); Premier supermarket (August 19); Wah Yun supermarket (August 29); Well Luck supermarket (September 2); Texaco Star Mart (September 9); Quality Foods supermarket (September 17); Best Food supermarket (September 24); Subway restaurant on W.J.A. Nisbeth Road (September 28); and Welcome supermarket (October 18). All these robberies yielded the total amount of US $8,210.
Police tracked P. down via the licence plates of his champagne-coloured car which has a “unique” brake light on the hood. The vehicle was caught on video-surveillance camera images during the armed robbery of Star Mart.
The Prosecutor said the robberies were committed by the same two persons working with the same modus operandi. One masked robber posted at the door while holding a firearm in each hand, while the other emptied the contents of cash registers in a grey backpack. The backpack was found at the suspect’s home during a search.
The robbers exerted violence during the robberies, ranging from an “intimidating” pat with a weapon to a bloody beating.
The suspect, who is a bartender by profession, asserted his right to remain silent. His attorney Geert Hatzmann said the investigative team was wrongly tapping their chests in considering these cases proven.
“I am not so convinced of their resounding success. Sixty per cent of the cases were not included in the indictment. I will be wiping all these cases off the table,” the lawyer announced.
He pointed out that the descriptions given of the two suspects were not identical, and said the recognition of his client’s voice was incorrect.
“These robberies were committed by several duos, and the backpack that was found is far from unique. The Prosecutor’s case against my client has many flaws. Therefore, he should be acquitted,” said Hatzmann.