Home Local News Suspect in two deaths on board tanker to be handed over to... 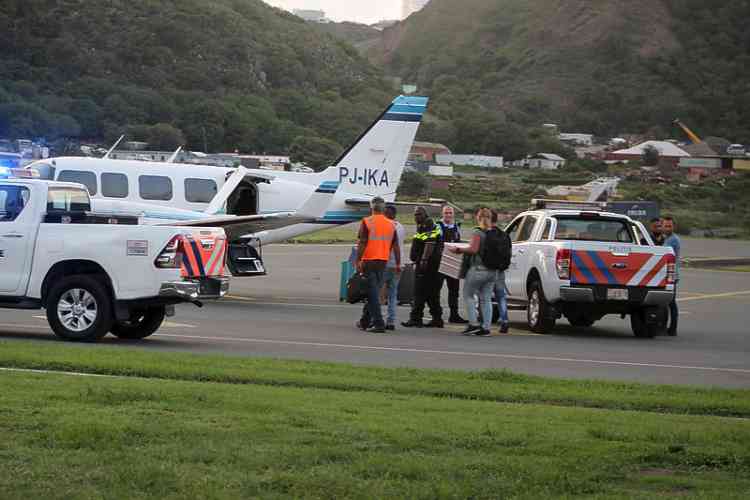 Officers of the Caribbean Netherlands Police Force (KPCN) and the Royal Dutch Marechaussee and aircraft personnel loading the chartered aircraft, while suspect in the double homicide on board tanker “RBD Gino Ferretti” R.C.B. sits in the police vehicle awaiting transport to Bonaire on Monday, September 9.

ST. EUSTATIUS–The 43-year-old man from the Philippines who is suspected of involvement in the deaths of two of his fellow countrymen on board the Italian oil tanker RBD Gino Ferretti will be handed over to the Italian authorities, the Caribbean Netherlands Police Force KPCN said Wednesday.

The incident aboard the tanker was first reported to the police in St. Eustatius on September 3 while the vessel was in international waters. The tanker reached the Statia harbour on September 5.

The suspect R.C.B. was eventually arrested by the KPCN with permission of the Italian authorities. The oil tanker, which sails under the Italian flag, was en route from Brazil to Statia.

Police officers questioned the suspect and conducted a tactical and technical investigation onboard the ship. The suspect had such a severe injury to his hand that he had to be transported to Queen Beatrix Medical Centre twice a day for treatment. The wound was so severe that it required the attention of a surgeon.

Because of the suspect’s medical condition and due to the fact there is no medical facility in Statia to properly handle an injury of this nature, and in the interest of the investigation, the suspect was transported to Bonaire by a chartered aircraft on Monday.

R.C.B. will be transported from Bonaire to Amsterdam, where he will be handed over to the Italian authorities who will further take charge of the investigation. KPCN will then no longer be involved.

All information and evidence that was collected by the KPCN investigators will be turned over to the Italian authorities. The Italians will then handle the further investigation into the deaths of Q.L.Q. and R.J.J., who were both from the Philippines.

KPCN said the suspect has provided the police with a statement. As the contents of that statement are still part of the investigation the statement cannot be released to the public at this time, the police said.

The mortal remains of A.S.C., who was a cook on board tanker PJ Georgina, were transported to St. Maarten on Monday. A.S.C. fell ill on August 31 and died as a result of illness, according to the official doctor’s report. The medical report stated that there was no foul play involved and no signs of criminal activity.

The Prosecutor’s Office will not order an autopsy. Family members of the deceased will be travelling to St. Maarten to claim the body and to see to it that an autopsy is carried out on their behalf.