Home Headlines & Top Stories Suspect may be jailed for nine years for shooting in St. Peters... 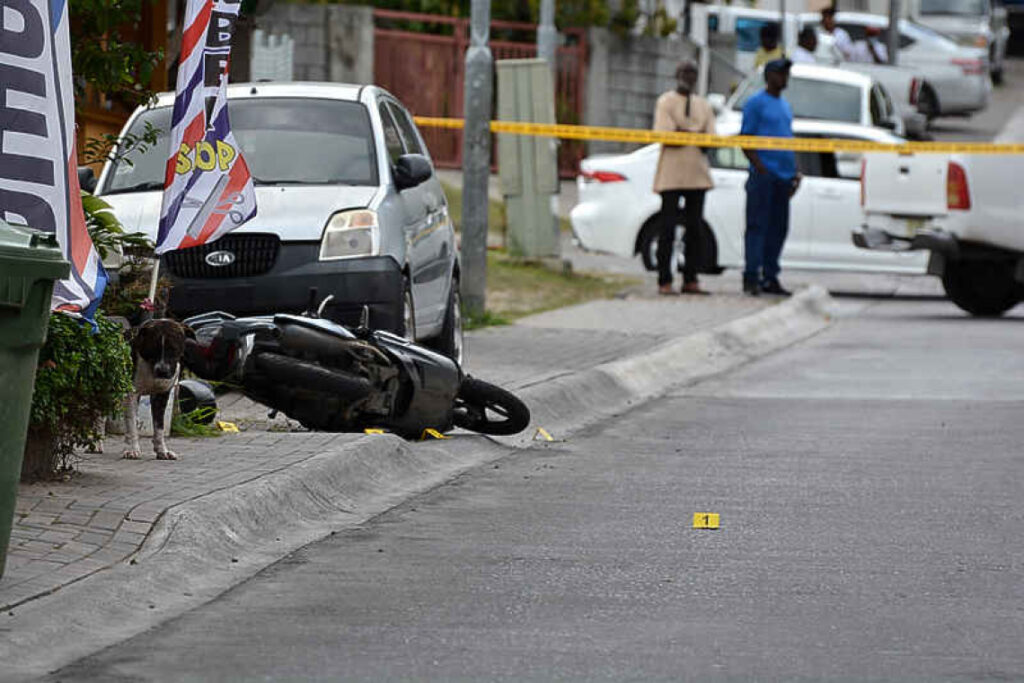 The scene of the shooting on St. Peters Road as detectives collected forensic evidence on March 19. (File photo)

PHILIPSBURG–A nineteen-year-old man suspected of involvement in an attempted manslaughter case concerning a shooting in St. Peters on March 19 may be sent to prison for nine years, if it were up to the Prosecutor’s Office. During Wednesday’s hearing in this case, the prosecutor called for a thirty-month prison sentence for a co-suspect for illegal firearm possession in the same incident. Both will be learning their fates on October 27.

A barrage of gunfire rang out on St. Peters Road in the vicinity of Santos Bakery around 2:45pm March 19, allegedly aimed at two men on a scooter.

The victims were not injured and managed to escape on foot. They are also considered suspects in this case. Victim M. is currently held in pre-trial detention in the Pointe Blanche prison and victim G. is detained in Guadeloupe on other, unrelated charges.

His mother told the police that she overheard his friend, co-suspect and alleged shooter A.L.F. (19), telling her son “that the guys are up here. When the boys who were riding the scooter came close to my yard, I heard a couple of shots. At that moment the boys who were with my son took out their guns and started firing shots in the direction of the boys on the scooter. While the boys on the scooter were shooting, A. came up the porch and grabbed his gun that was in an old motorbike and he probably shot at the guys also.”

She said her son had told her that he could not get rid of the gun “because all of the boys on the block have a gun to protect themselves and he need those guns to do so also.”

Suspect A. denied that his co-defendant F. was the man who had fired gunshots at the two men on the scooter. Heard in court as a witness in F.’s case, A. maintained his denial while under oath, which led the prosecutor to initiate an investigation into possible perjury. This is considered a crime, as lying under oath is not permitted.

The Prosecutor’s Office rejected any self-defence pleadings in this case. “I emphatically do not see one party as the aggressor and another as the defending party in this shooting. In this incident, there were two parties confronting each other,” the prosecutor said.

Carrying a weapon on the street merits a prison sentence of 21-24 months. A. was sentenced to eight years on August 4 for involvement in the attempted manslaughter of two persons during the attempted theft of a scooter in St. Peters on March 3. Two weeks later, he took his gun with the intention to use it again.

“On an ordinary weekday and on the street where other people were walking and driving in their cars, he went after two people to shoot them,” the prosecutor said. He failed because they already fled the scene.

F. knowingly shot two people with a firearm, according to the prosecutor. “This shooting did not come from an instantaneous impulse,” but was the result of an encounter on the public road with the guys on the scooter not more than three minutes before the shooting, the prosecutor said. “F. stood armed on the porch [of A.’s house – Ed.] and knew the gunmen were coming,” he said.

The shooting occurred in a busy neighbourhood. One of the bullets that were fired landed in the bakery next door and A.’s mother, who was also on the veranda, could have been hit, as well as other people in the vicinity.

“It will not be the first time in St. Maarten that an innocent person is shot dead in a shooting between young people who want to act tough. Because that is what it is. A bunch of young guys who think they’re cool with a gun, then get into a fight, and think it’s a good idea to start shooting around. Then the next revenge action can start and the vicious circle of [firearm] violence will turn again. Completely pointless, and it creates enormous dangers and fears for people who just want to live their lives,” the prosecutor stated.

“My client is the victim in this case,” A.’s lawyer Sjamira Roseburg said in defence of her client, who did not deny that he owned an illegal firearm.

“Gunshots were fired at him and at other people in his vicinity, including his mother. He ducked away and did not shoot back. I request you to include this in your considerations,” Roseburg told the judge.

Due to extenuating circumstances, the lawyer recommended that her client be declared guilty without imposing a sentence.