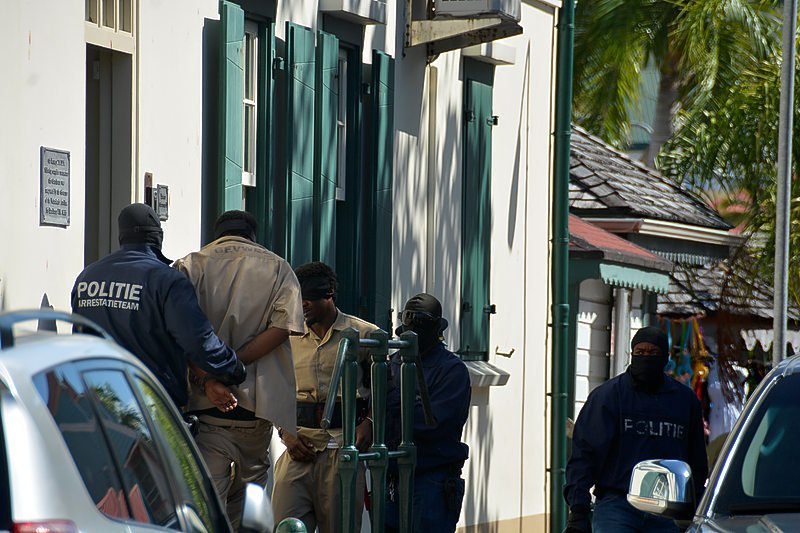 PHILIPSBURG–The Prosecutor’s Office on Wednesday called for prison sentences of 25 and 15 years against two suspects held responsible for two violent armed robberies at Sol gas stations in the early evening of November 31, 2015.

A gas station attendant lost his life in one of the robberies. The attendant at Tackling gas station in Cole Bay was shot three times to his stomach and head, in what seemed like an execution-style killing. The robber then turned the attendant on his stomach and searched his pants for money, it emerged from video-surveillance camera images, which were shown in the Courtroom.
Suspects B.A.D. and R.O.R., who are both 23 years old, were handcuffed during their trial, which took well over four hours.
Prosecutor Karola van Nie said she was “firmly convinced” that both suspects were responsible for both robberies. She held R.O.R. for the main suspect, as he was held responsible for the two robberies and for killing the attendant.
The Prosecutor called for a prison sentence of 25 years for aggravated manslaughter, armed robbery, extortion and possession of an illegal firearm with ammunition.
B.A.D. was accused of complicity to these crimes, as he was the driver of the getaway car used in the robberies. The Prosecutor asked for 15 years imprisonment in his case.
After the first robbery, the two men managed to escape in a black Hyundai I20. Just across Simpson Bay Lagoon, minutes after the shooting took place, Sol Simpson Bay also was robbed in a similar fashion by one of the bandits involved in the Cole Bay robbery. The Simpson Bay attendant cooperated and handed over the cash to the robber.
A customer who tried to pursue the getaway car, was threatened at gunpoint and was forced out of his car, after which his car keys were taken.
Police responded immediately to the call of the second robbery and dispatched patrols to the area. In efforts to secure the area, they checked vehicles on the causeway and noticed a suspicious black Hyundai I20. They searched the vehicle and found money believed to be from the Simpson Bay and Cole Bay robberies in the possession of two men.
US $1,370 was taken in the first robbery. The second one yielded $1,439 in different denominations, among which were a brand-new US $100 bill which had come into circulation on November 25, 2015, as well as some new 20-euro bills.
The revolver which was used in the robbery was also found inside the vehicle. R.O.R. told the Police he had bought the revolver from a “crack head” for US $140 two weeks before the incidents.
Prosecutor Karola van Nie said the evidence against the two suspects was “overwhelming,” but the two men denied any involvement.
R.O.R. claimed he had been with his girlfriend in Sandy Ground and had never been near the Cole Bay gas station. R.O.R, who hails from Nevis and sells fish to make a living, claimed the second robbery was committed by a man he knew as “Steven.” He said they had picked up the man on the beach in the vicinity of Bada Bing nightclub.
B.A.D. tried to convince the Court that he had not been aware of any ill intentions and said he had only come with his co-defendant “to run some errands.” He also claimed he did not know that R.O.R. was carrying a gun.
Notes found in B.A.D.’s cell indicate the men had attempted to coordinate their stories, according to the prosecution.
Lawyers Shaira Bommel and Safira Ibrahim pleaded for their clients’ acquittal for lack of legal and convincing evidence.
Ibrahim pointed out that only traces of the victim’s DNA were found on the confiscated firearm. She wondered why her client’s clothing had not been investigated. She said the video-camera images were too vague and too dark to identify the robbers.
R.O.R’s lawyer claimed witnesses had failed to provide accurate descriptions of the perpetrators and wondered why these witnesses were not shown pictures of the suspects.
Bommel maintained that B.A.D. had not been involved in the robberies in any way. “That he was there does not mean that he was involved,” she stated.
Gas station owner Ronald Tackling filed for US $6,215 in damages. He paid the funeral cost of the attendant, who had been in his employment for four years, attorney Nathalie Tackling explained.
The suspects’ lawyers said the claim should be rejected as it would be too complicated to handle in a criminal procedure. The Court will give its decision on June 8.