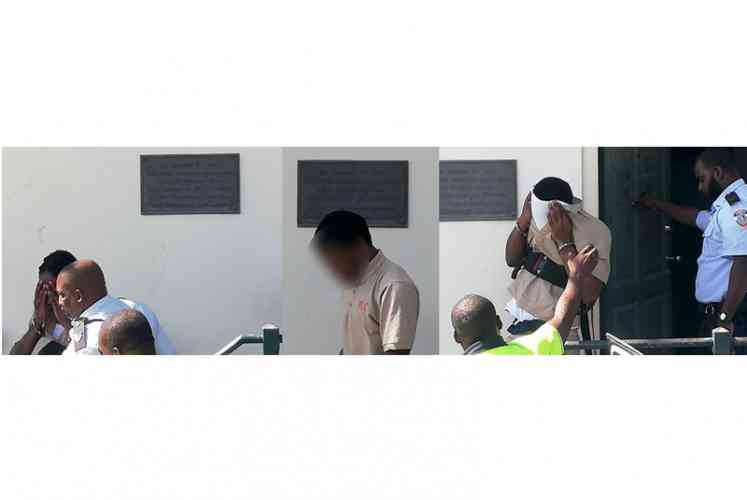 The suspects in the “Amazoniet” case involving the deadly armed robbery of a Canadian tourist on Beacon Hill Road in June leaving the Courthouse early Wednesday afternoon. (Composite photo)

PHILIPSBURG–The three suspects in the so-called “Amazoniet” case involving the armed robbery of a Canadian tourist and his daughter on Beacon Hill Road near Maho on June 5, after 11:00pm, will go on trial on Wednesday, December 11, it emerged during Wednesday’s preliminary hearing.

The suspects K.H.S.R. (20), G.M.S. (19) and J.S.E. (17) have been behind bars since August and will have to answer to charges of manslaughter, armed robbery that led to the victim’s death, and illegal firearm possession, during next month’s Court proceedings.

Their lawyers pleaded with the Court to lift their clients’ pre-trial detention, but the judge found there were sufficient reasons and grounds to keep the defendants in preventive custody.

“At this moment there are firm suspicions against the three suspects,” the judge told those present in the courtroom, including some of the suspects’ relatives. “The accusations are too strong to let them go,” the judge said about the defendants.

According to the Court, there are strong indications that suspects E. and S. were at the crime scene and that R. had assisted in the crime by providing a vehicle and a firearm to his alleged accomplices. Suspects E. and S. denied their involvement.

During the robbery, Canadian national Sylvain Valade, was shot in his efforts to protect his daughter from any harm, and succumbed to his wounds later at a hospital in the United States. The victim’s daughter was not physically injured, but was emotionally traumatised by the incident.

Directly after committing the act, the robbers fled the scene in a small white vehicle towards French St. Martin, where they went into hiding. The Special Unit Robbery (SUR) of the Police Force St. Maarten KPSM immediately launched an investigation and gave this case highest priority to locate and apprehend the culprits and bring them to justice.

“The SUR team worked tirelessly with persistence and in close cooperation during many long hours with the local Prosecution Service and the French Gendarmes to solve this case, which started just over two months ago,” the police said during a press conference at which the suspects’ arrests were announced.

The robbery, which ended in the death of a visiting tourist, was covered by the international media and shocked the entire community of St. Maarten, including visitors to the island, the police said at the time.

The legal proceedings will continue next month, by which time reports by the Parole Board and a psychologist will have been added to the case file.