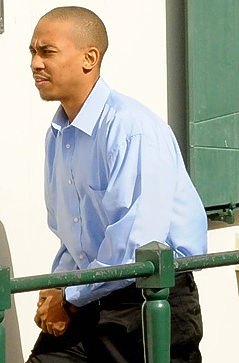 PHILIPSBURG–Convicted police officer Richmer Michel Patrik York (24) contested his conviction on Thursday. The Common Court of Justice heard the entire case and will give its verdict on December 7.

York is presently serving his time in Aruba. He was flown in for the proceedings and sat in a very calm demeanour answering questions from the three-judge panel.

Attorney-at-law Shaira Bommel pleaded again for her client’s acquittal on the grounds of self-defence and called on the Court to dismiss all charges against her client. The young officer, who has been suspended since the fatal incident, was acquitted of murder, but found guilty of manslaughter and possession of an illegal firearm, which merited an eight-year prison sentence.

York was arrested May 17, 2015, in connection with the fatal shooting of 22-year-old Akeem Isidora.

According to the defence, York was trapped inside his car, which was surrounded by men who were threatening him. This made it impossible for him to drive away while Isidora was threatening him verbally with one hand hidden under his clothes and Isidora’s brother was threatening York with an axe. When Isidora suddenly opened the driver’s-side door of his car, York had no time to fire a warning shot and no other option but to defend himself with his service weapon.

Solicitor-General Ton van der Schans stated that the charges against York had been proven. He asked York on Thursday why he had not locked the doors of the vehicle instead of driving away. York said that he had not been thinking at the time and had defended himself.

The Solicitor-General said York had had other options and ample opportunity to drive away from the scene, as the engine of his car had been running, it had been in gear and without the handbrake on.

Van der Schans added that evidence showed that York’s girlfriend had had ample time to go inside her house, call York and tell him to drive away. Instead, the off-duty police officer kept waiting in his car with his gun in his lap, the Prosecutor pointed out.

York said that he had feared for his life and had seen no other option but to open fire. He explained that he had had a loaded gun because he was a member of the Police Special Unit dealing with robberies, prison riots or major emergencies.

The shooting occurred after York came to the neighbourhood to pick up his girlfriend, who lived next to Isidora. He believed he was being disrespected as a police officer, as Isidora had called him a “faggot.” According to his girlfriend, York then showed his gun to Isidora and said: “One in here is for you.”

The problems started anew a couple of hours later when York brought his girlfriend home and they were still talking in the car. When Isidora and his brother came up to the car, York told his girlfriend to go inside her house and then he called his police team leader for assistance.

When Isidora opened the driver’s-side door of York’s car, York immediately fired two gunshots, after which he drove away at full speed. Isidora was mortally wounded.

At the end of the session York called for his acquittal and apologised for the incident having gone so far. “I was building my house since I was 18 years old and I would like to continue my life. I do not want to do this in prison. If I did not do what I did, I would not be here right now to tell the story.” York said during the case hearing.