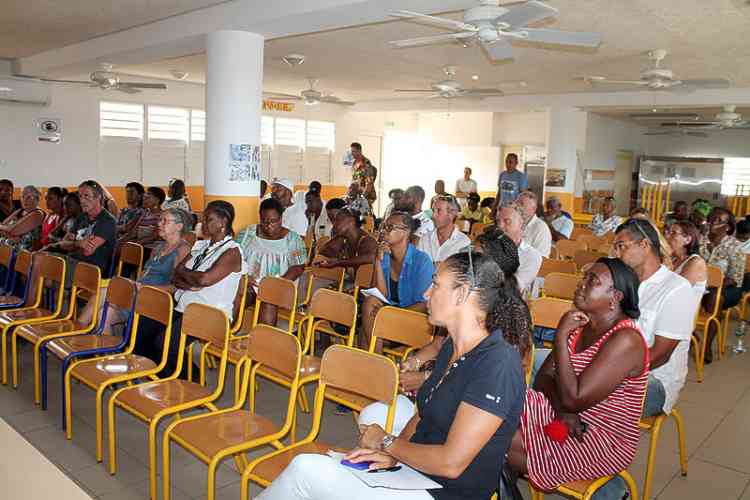 The audience during the early part of the PPRN meeting. The room soon filled up. (Robert Luckock photo)

MARIGOT–Thursday’s latest public meeting in Sandy Ground to inform the population of the objectives of the revised risk prevention plan for natural disasters PPRN started well but still ended with a walk-out from a segment of the audience just before the end, unconvinced of the Préfecture’s sincerity over the plan.

With much of Sandy Ground located in the highest-risk zone, this meeting was destined to provoke heated debate and present the PPRN with its biggest challenge.

A continuing pattern of perceived mistrust has existed since the disastrous general meetings on the subject in April. The Préfecture still has an uphill battle to convince a sceptical local population of its intentions to protect the interests of inhabitants and get the plan validated and over the finish line by the end of December 2019.

Although the Collectivité is not responsible for the environment, – the PPRN is drawn up by the State, revised from the 2011 version – the question which still remains for many is why there is never a representative from the Collectivité at the meetings to answer questions that pertain to the Collectivité.

The legally required public consultations on the plan have progressed into the second phase of presenting the plan by district, theoretically a more orderly and more intimate way of presenting it. Four public meetings have been planned in June; the first was on June 17 at the Lycée in Concordia, reportedly poorly attended. Sandy Ground was the second one and there are two more to go, June 24 at 5:00pm in Cité Scolaire, La Savane, and French Quarter Collège on June 27 at 5:00pm.

The Préfecture to its credit kept its promise by presenting the plan in English and French in an understandable way, with a projected Power Point presentation, showing the flood risk maps, the degree of risk denoted by five colours, and the rules for reconstruction, in English and French. It also encourages the population to view the PPRN video on its Facebook page: www.facebook.com/prefet971/videos.

It did not help matters that quality of the public address (PA) system in the classroom of Aline Hanson Primary School was very poor and made it difficult to hear clearly Alex Richards’ English translation. The presentation was once again given by Préféte Déléguée Sylvie Feucher, Secretary-General of the Préfecture Mickaël Doré and a representative from Direction de L’Énvironment et Aménagement et Lodgement (DEAL).

The Préfecture has repeated its assurance that the PPRN will not expropriate property saying that its main goal is to identify risk. The expropriation question has been contested by Territorial Councillor Jules Charville who believes the State is practicing an “indirect” form of expropriation or “soft expropriation,” a practice he says will continue over a number of years until defined or is returned to its natural state.

Charville, speaking as a resident and landowner in Sandy Ground and not as Territorial Councillor drew the Préfète’s attention to a November 9, 2017, report by Philippe Gustin, the former Préfet and Inter-Ministerial Delegate for the reconstruction of St. Martin and St. Barths, in which he recommends “considering deconstruction in certain urban zones.”

Charville reminded that President of the Republic Emmanuel Macron on his second visit to St. Martin in September 2018 also said in one of many statements “there will be expropriation and houses will be demolished.”

According to Charville the Préfecture is encouraging inhabitants that don’t have title to their property, cannot rebuild under the new rules, cannot get insurance, to accept 40,000 euros from the Fonds Barnier to re-locate. He calls this a form of “indirect” expropriation. The Préfète argues that it is a voluntary process of “not forcing people out but waiting for them to come to us.”

He added the Préfète disclosed in an SOS Radio interview that there are nine cases of families willing to accept “voluntary expropriation.”

One audience member brought up the point of several families owning land and property handed down from generations, land destined to be passed on to grand-children, and who will never move. Others argued over why two areas would have different colours when both are exposed to the same risks.

“The Préfecture needs to explain to the population its real goals,” Charville told The Daily Herald. “What about this talk of deconstruction and banishing certain zones? Is that the State’s real objective? The State is not talking about protection options because that costs a lot more money that deconstruction and demolishing. For a population already accustomed to living with risk protection makes more sense than deconstruction.”

The district representative for Sandy Ground, Baie Nettle and Lowlands, Cédric Andre, has proposed forming a committee composed of a small delegation from each district, a member of the Territorial Council majority and opposition, and a few chosen specialized persons (architects, technicians) from outside to come up with different options to move the PPRN forward without moving people.

This proposal is under consideration by the Préfecture.