Home Local News SXM Airport is back in business 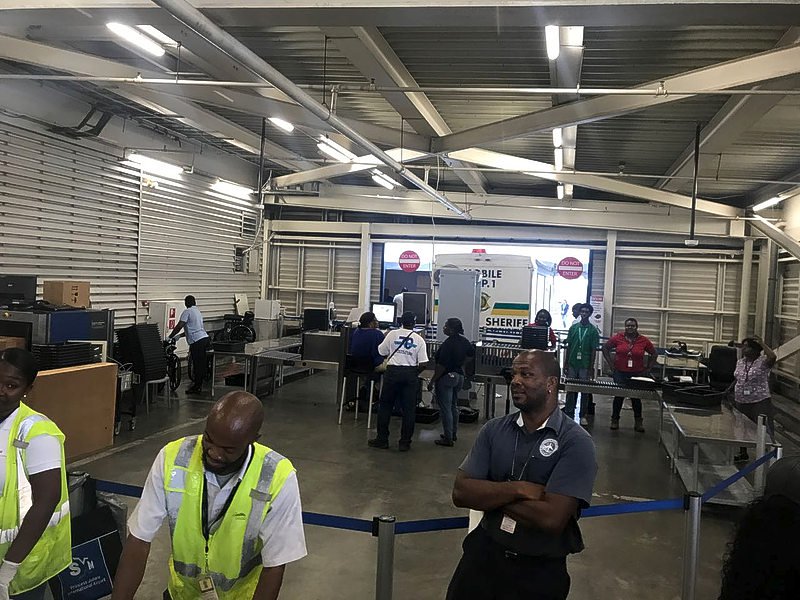 The temporary bag-checking area at the Airport on Tuesday.

The two ministers were present at 7:50am to welcome the first flight, Winair, that arrived from Saba, beginning the day that saw six flights land with one cancellation from Winair that was scheduled to touch down at the Airport in the morning. The reason for the cancelation was mechanical issues. Flights WM806 and WM812 were combined with departure time 3:30pm.

A festive welcome ceremony was organised that included live music, women in beautiful Carnival costumes, giveaway items, finger-food snacks and cold beverages. The special welcome was put together by the airport, the Tourism Bureau and Topper’s Restaurant for the arrival of Delta Airlines, American Airlines and the remaining flights for the day.

PAWA Airlines was the final flight of the day, arriving from Santo Domingo with residents and visitors to the island. PAWA Commercial Director Sebastian Garcia on his arrival presented Prime Minister William Marlin with a replica model of a PAWA airplane. On the model were written the words “Together we fly higher even under the strongest storms.”

Marlin in turn presented Garcia with an appreciation plaque. “We are very grateful and thankful for the support and your arrival is a sign of confidence in the recovery of St. Maarten,” Marlin said.

The Government also recognised PAWA as the airline that flew in the most relief goods during the period when only humanitarian flights were allowed following the passing of Hurricane Irma.

Prime Minister William Marlin greeting a passenger who arrived on the first flight on Tuesday.

Winair staff and Government officials at the airport.

The Pawa pilot proudly displaying a St. Maarten flag on his aircraft landing.