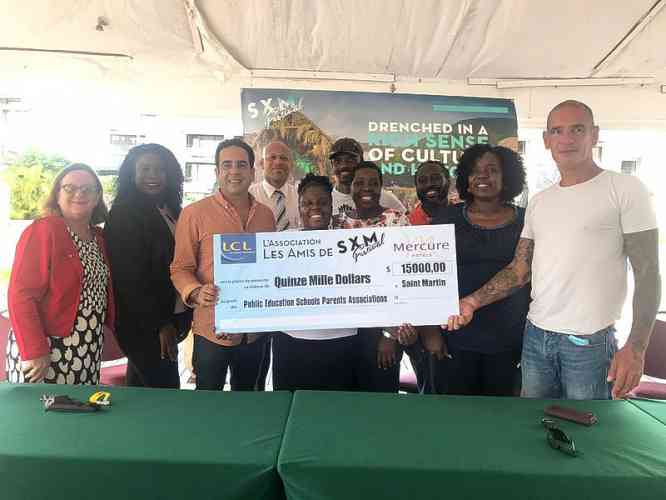 SXM Festival organisers present public-school managers with a US $15,000 cheque to purchase school supplies on Tuesday.

MARIGOT–The SXM Festival organisers made a sizable donation to public schools at Mercuur Hotel on Tuesday.

The organisers hosted two festivals geared toward having young tourists who enjoy house music enjoy the island during the low season. They were busy planning for the 2018 festival when disaster hit the island last year in the form of Hurricane Irma and the event was postponed this year, but is expected to return next year. With rebuilding in mind, SXM Festival organisers reached out to their fans worldwide and started a GoFundMe page.

After collecting from fans, the group decided to help out schools on the island directly. They have already donated some supplies to schools in French St. Martin and on Tuesday they made a donation of US $15.000 to public schools in Dutch St. Maarten. School managers from the different public schools were in attendance and Education Department official Marcellia Henry represented government.

The funds will be used to purchase supplies for the different schools.

Launched in March 2016, SXM Festival is now widely recognised as one of the world’s best destination festivals for lovers of underground electronic music.

Each day through to night through to sunrise, parties take place at several carefully selected venues on this paradise island, with state-of-the-art sound and truly inspiring production, plus a host of secret after-parties at private villas, boats and beaches that the island has in abundance. It’s simply the most perfect party environment imaginable.

For more information about SXM Festival go to