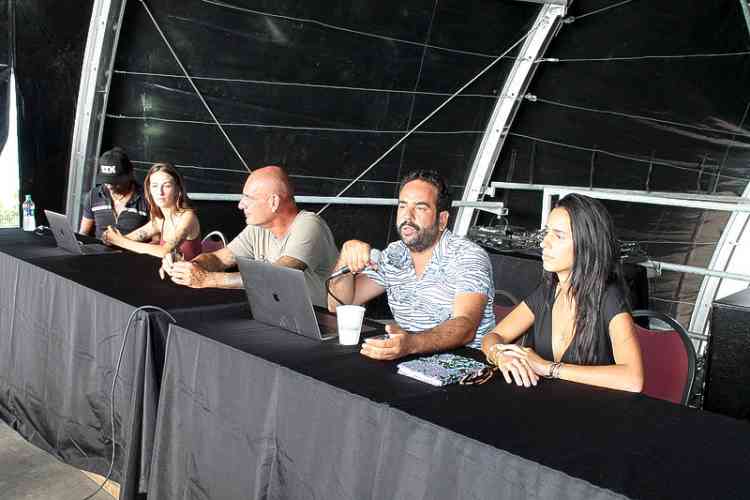 MARIGOT–The third edition of SXM Festival was officially launched by organisers at its main venue on Happy Bay Beach on Wednesday in the presence of government and tourism office officials from both sides of the island, sponsors and media. The festival will be held March 13-17.

This year marks only the third edition – the event was not held in 2018 – but the electronic music festival in St. Martin has established itself in a short time as a must-do event among thousands of concert-goers the world over, not to mention the attraction of some 40 deejays of international repute.

“This is a second home for us in St. Martin,” said co-organiser Abdou Elouali. “We love it here. But we could not pull off this festival without the support of the governments, tourism offices, sponsors, media, and the people of the island. To all of you we are truly grateful.”

Elouali said the organisation is well aware that the island is still in a recovery and rebuilding process. As such, SXM Festival has been engaged in fundraising to support social and community actions as part of a 10-year vision plan for the island.

“Since 2018 the team has stayed here, and thanks to generous donations we have raised over US $55,000,” he disclosed. “That is going to be spent in the schools, $10,000 to our partner SXM DOET for their actions, and we have sent two young people, one from the French side, one from the Dutch side, to join the Peace Boat project in Patagonia.”

Rudy Issorat, who is in charge of donations and social actions, elaborated on how the money will be distributed: $30,000 will be divided equally between the Dutch and French sides of the island – $15,000 will permit materials to be bought for six Dutch-side schools and the same amount for nautical and leisure equipment for French-side schools.

“It’s our first experience in organising social actions, and with a partner like SXM DOET and other associations we hope to do more in the future,” said Elouali. “We are also working with two insertion associations in Sandy Ground some of whose young people are helping us with the festival.”

“We all come from different parts of the world to make this festival happen,” said Lopez. “We love to work with local materials, organic materials for the decoration, and at the moment we are really motivated to use driftwood and branches, painting them and bring them back to life after the sadness of what happened. We created something here that is a combination of organic, classic, flashy and hippy. Expectations for this festival are really big from the outside world.”

Elouali said SXM Festival’s signature look has been copied around the world, adding he is “proud” of that.

Dutch-side Minister of Tourism, Economic Affairs, Transport and Telecommunications (TEATT) Stuart Johnson said the Dutch-side government has pledged $100,000 to the event, describing that as a “dramatic increase.”

“Because I see this as a testimony to St. Maarten’s resilience, strength, diversity of our people and the attraction of what the festival can bring,” said Johnson. “SXM Festival brings the genre of electronic music here, which opens up a new market of supporters to the destination. This festival shows that confidence in the island is back. I hope the festival grows by leaps and bounds and the 10-year plan becomes a 15- or 25-year plan of growth for St. Maarten.”

SXM Festival will be taking place at Happy Bay, Loterie Farm, and on the Dutch side at venues Lotus, Refuge, and Karakter on Simpson Bay Beach.

The Baie Nettle venues of Ma Ti Beach and Layla’s will not be ready this year.