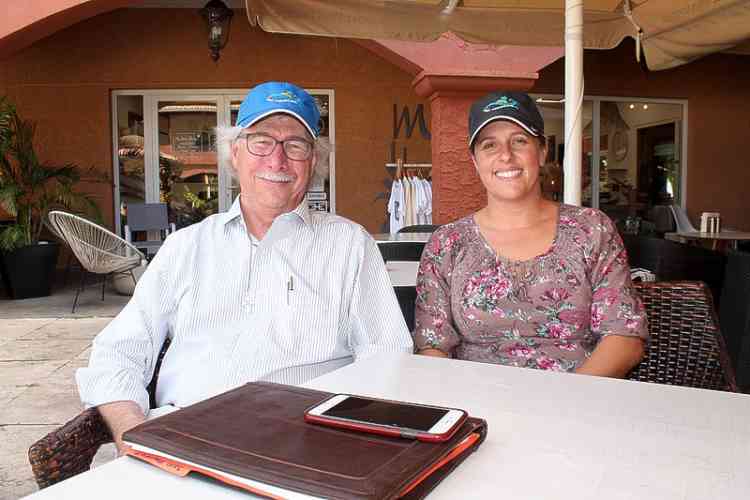 MARIGOT–It’s been fourteen months since Hurricane Irma struck the island with devastating fury on that fateful day, September 6, 2017. In that time scores of inhabitants have received help from the many aid organisations who responded as they do to natural catastrophes all over the world.

Some have left the island, their job done, others remain and continue to provide humanitarian aid, whether it be food, materials or help with reconstruction in the most impoverished sectors of the island.

SXM Project is one of those organisations that provided immediate relief and continues helping to this day. In fact, it’s here for the long haul, on a multi-year project, based on its three-phase strategy of Relief, Restore, and Re-establish.

Perhaps unlike other organisations SXM Project has a particular affinity with the island. Its President R.D. “Donny” Dicharry is a homeowner here and knows all too well what the aftermath of a severe hurricane is like. It’s the reason SXM Project reacted so quickly.

“I’m from Louisiana, near New Orleans, and have been through hurricanes all my life,” he discloses. “In 2007 we went through Katrina which was a lot like Irma, so I knew exactly what you were going through.

“One of our members Jon Bobbett chartered some small aircraft from Puerto Rico a couple of days after Irma and flew in supplies, without any landing permission and long before the airport was functioning. Later we started bringing in food in large 40-foot containers from the US. On one of my properties we made a secure site on a tennis court and that’s where we distributed from.”

The relief phase, now finished, administered 33,000 pounds of aid, including food, generators and more to over 500 residents in St. Maarten/St. Martin, financed by the two main benefactors, Donny Dicharry and Jon Bobbett. In addition, volunteers have been on the ground helping to clean up debris and secure tarpaulins on damaged homes. During this phase, SXM Project became a US-based 501 (c) 3 not-for-profit organisation with a home base in St. Rose, Louisiana with a volunteer presence on the island.

Phase two, which is the Restore phase, is currently in progress. The goal is to raise US $875,000 and over US $174,000 has been raised so far. The timeframe is from January 2018 until completion. Recent achievements have been the repair of 11 homes thanks to a significant donation from Jon Bobbett. The first home repairs were completed in July. Bobbett is also the one who donated funds to rebuild the basketball court in Sandy Ground.

In September 2018, SXM Project worked with partner Shams from Philipsburg to deliver new appliances to qualified individuals and families.

“We have selected another 20 households to give them refrigerators, stoves, washing machines, especially in Sandy Ground,” Dicharry added. “Volunteer Carline Jean-Philippe is the one who goes around to the homes to establish the needs, so we don’t give these appliances away just like that. Nor is it a long-term plan of the project.”

“The house rebuilding and restoring households will continue well into 2019. We’re helping as many people as we can, even though we are doing a very small part. It’s essential for us to engage in these preliminary activities because it sets us up for phase three: Re-establish,” Dicharry continues. “We are establishing our credibility, capability and staying power. Our vision is to create a tourism project that will sustain the economy and create jobs. We are going to commission an economic feasibility study in early 2019 which will determine how much money we will need.”

The tourism project, not yet officially disclosed, will require significant funding but it’s not yet known where that funding will come from.

“The intention of the project is to have sufficient revenue to fund a perpetual foundation. Its role will be to provide future preparedness and humanitarian relief for future hurricanes and long-term economic growth,” Dicharry explains. “It will partner with churches in the New Orleans area. There will be trained volunteers with suitcases packed ready to respond at the beginning of every hurricane season.

“Not only that, the foundation will be responsible for lodgings for those volunteers, staging areas for distribution of food and relief supplies, the means to supply hot meals, et cetera.”

The plan is for the foundation to also fund a campus in collaboration with French Quarter-based Helene Hunt who has been delegated to lead and develop the campus to provide educational, cultural and social programmes on the island.

“We’ll be seeking government assistance but there will be zero government control. We are hoping the respective heads of local government will incorporate us in some manner in the memorandum of understanding (MOU) to join forces in the cultural industry of the island.”

Dicharry recalls during Katrina he noticed a National Guard member on patrol on his street who was not in uniform, but wearing jeans and T-shirt. When he asked why, it turned out the man was a volunteer fireman from New York.

“That really touched me, says Dicharry. “It lifted my spirits so much. It’s part of the reason why we are doing what we do here. The power of the human touch of one volunteer is much more powerful than what any government can do.”