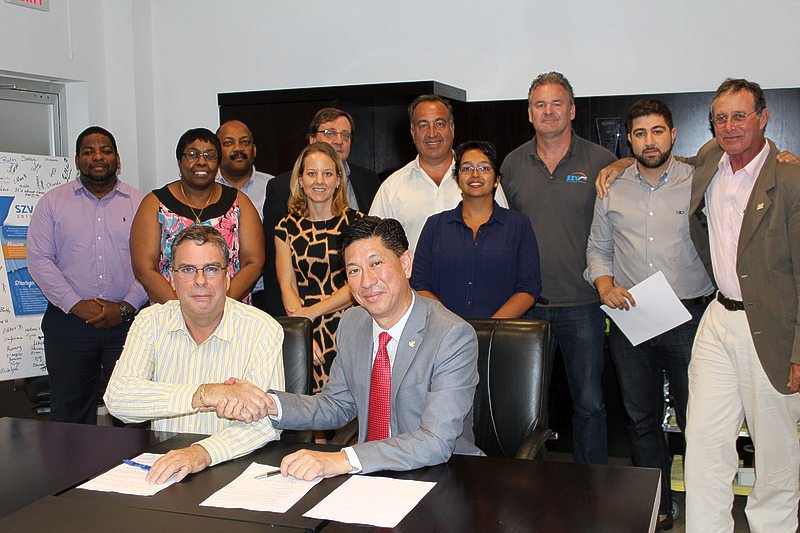 PHILIPSBURG–Minister of Public Health, Social Development and Labour Emil Lee and Social and Health Insurances SZV Director Glen Carty have signed the first-ever Performance Agreement between a minister and SZV director since the founding of the insurance service provider after October, 10, 2010.

The performance agreement is a legal obligation and is directly tied to the operational budget of SZV, Carty submitted “by the yearly legal deadline, which was also a first for SZV,” the insurance service provider said in a press release on Thursday.
The performance agreement calls for an enhanced digital medical referral process; benchmarked results for the safe investment of social funds that must have a measurable standard; medical care quality reviews; improved customer satisfaction and bi-annual reports on the terms in the agreement issued with input from the Supervisory Board.
The agreement is also the result of months of work to establish what SZV said is a landmark document that can act as a model for future ministers and directors to follow. A team consisting of members of the ministry’s staff bureau, the minister’s cabinet and SZV’s legal and operational management, crafted a document that establishes goals for SZV that are meaningful, achievable, realistic and have a timetable, it was stated in the release.
“The signing of the performance agreement, which details the criteria by which the director is evaluated, is actually only possible now that many non-compliance issues which have not been addressed in the past have finally been resolved. Over the past 10 months, SZV and VSA have cooperated to have VDSM screen the candidate director, formally appointed the director by national decree, had the budget submitted, reviewed and approved in a timely manner, and finally signed the performance agreement. ________________________________________________________________________________________________________________________________
“This is a critical tool to ensure that the quality of service from SZV structurally improves. By properly following the performance agreement, the public should see improvement in all aspects of service from SZV including the referral process,” Lee said in the release
“SZV, like many of the fledgling institutions that form the core of Country St. Maarten, has had a lot of growing pains in becoming a fully functioning organisation. The framework was established just prior to the breakup of the (Netherlands) Antilles, but like so many other key components of a new country, there has been a steep learning curve and many details left to be filled in. The performance agreement is aimed at improving the services and measurable results of the SZV while limiting the negative experiences through a continuing shakeup of the programmes which Carty terms SZV 3.0,” the release said.
“Since taking office, many people have come to me with both good stories and bad about experiences with the SZV. As a manger I have come to know that complaints are always heard first and loudest. Certainly we have seen that SZV has lots of room to improve as is normal with almost any operation. Customers rarely comment when they get the good service that is expected, but in the case of SZV I have also heard many good things about them as well,” Lee noted.
Carty: “This performance agreement is a hallmark of the change management process that I began at the end of 2014. I was brought in as Interim Director with the mandate to effect positive change in an organisation which is critical to the well-being of St. Maarten.
“This level of change does not happen overnight. First a needs assessment was carried out and then an implementation plan was designed. This plan is now in motion and is set to be completed by the end of 2018. Along with the support of Minister Lee for the full transition to SZV 3.0, I am extremely proud of the commitment of the staff of the SZV to bring about this change and our promise to deliver on these improvements to the people of our island.”