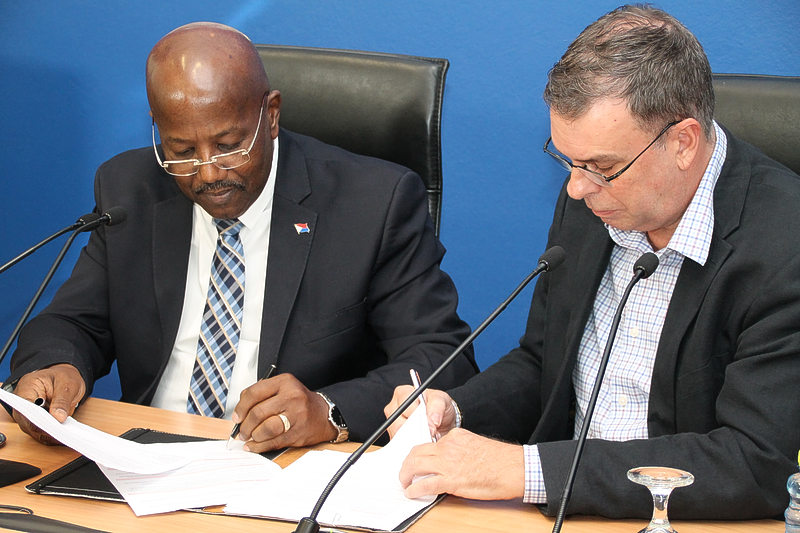 The lease agreement is retroactive to January, but government will start its monthly rental payments as of July, Marlin said during the signing. Government is expected to pay close to NAf. 500,000 (almost US $277,777) in rental payments monthly to SZV. The delay in payment to July will give government time to complete the relocation process of civil servants to the new building, and terminate its other rental property agreements to avoid double rent payment.

Government had sold the building to SZV, which invested into getting the building completed and has rented it back to government. Government will have the option of buying back the building after the 30-year term. The arrangement for the building with SZVand general pension fund APS was done as part of a package to settle a huge outstanding debt government owed to the parties.

In remarks at the signing, Marlin said while the majority of the work to the building has been completed, some minor work is still being finalised. He said the entire Council of Ministers has relocated into the building. General Affairs and other departments have also relocated, and Marlin said the top floor is now fully occupied with government and civil servants. “We will now begin mobilizing facility services,” he said.

Marlin said it was “with great pleasure” that he was signing the agreement on behalf of government with SZV. “We look forward to the finishing touches being done – one or two things still need to be done,” he said, adding that government is still lacking furniture and Information Technology (IT) software and hardware needed “to make it workable” for the civil servants who will be occupying the building.

“It has been a long process, but, if we compare the eight years that the building had been standing here unoccupied and the eight months or more that we have been busy with it, I say congrats are in place to all those who have rolled up their sleeves to make it reach to the point where we are today.”

Marlin thanked SZV for its cooperation over the past months; Erno Labega, who had been the “main man” in process and Finance Minister Richard Gibson, whom he said had been instrumental in sealing the deal with SZV. “I know that there were some tough discussions between himself [Gibson – Ed.] and [SZV Director – Ed.] Glen Carty and his team, but at the end of the day, we were all able to come out of it. It is a win-win-win situation,” he said, noting that the agreement enabled government to satisfy demands of the Committee for Financial Supervision CFT and the Kingdom Government.

Carty said SZV has to re-invest monies it received so that funds today can have greater value in the future. The purchasing of the new government administration building and investments made into the building are part of efforts by SZV to re-invest its funds. Investing locally, he said, has an added value in that “we are enhancing our country.”

SZV will make a six-per-cent return on its investment into the new building.

Carty thanked government as SZV’s new tenant, and urged them to “take very, very good care of our building.” Carty also thanked the teams from government headed by Labega and SZV for “a job well done.”