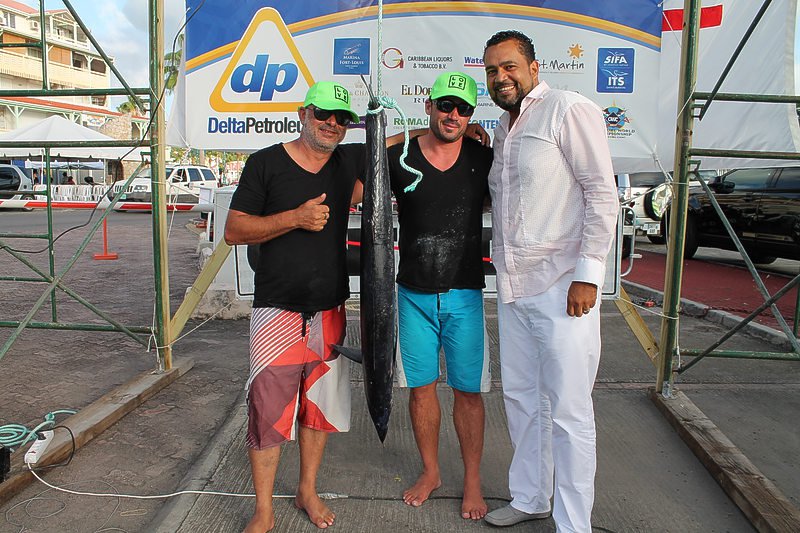 In second place was “Tao Tira”, a small Phoenix 29 from St. Barths, which was the only boat to bring ashore a Blue Marlin weighing in at 404lbs. The crew risked heavy penalty points if the catch was 400lbs or under.
Owner/captain Lionel Laplace reported the marlin took about 50 minutes to reel in at around midday but died in the fight. They decided to risk bringing it in to be weighed. 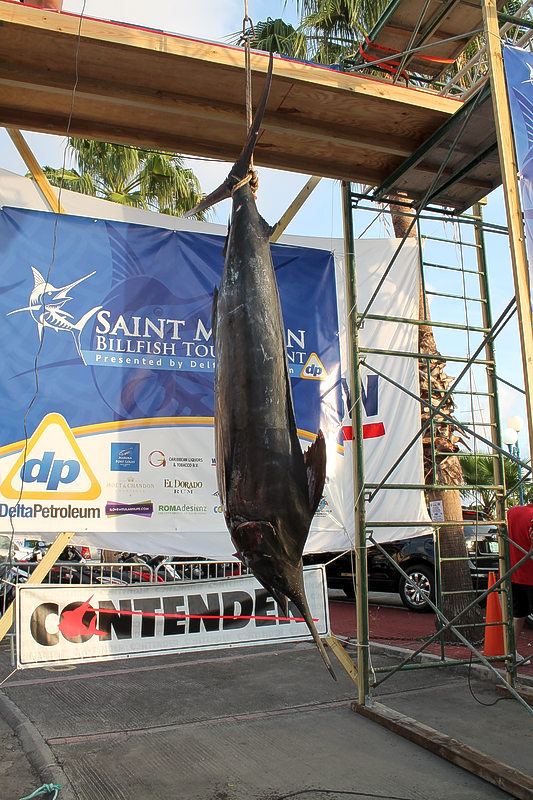 “Living the dream” released a Spearfish and “Sea Ghost” from Guadeloupe released a White Marlin while also catching a 43lb Mahi Mahi.
“Hangover”, a boat from St. Martin, caught a 50lb Wahoo and “Ipamol,” also from St. Martin landed a 49lb Yellowfin Tuna. The boat “Love” weighed in a Mahi Mahi at 30lbs.
Other boats that scored 300 points for one Marlin release included “Pescador,” “Rum and Coke,” “Lucky One,” “Bad Dog”, “Follow Me,” “Baby Blue,” and “Striker.” “Crank it Up” scored 200 points.
There was one accident during the day to a crew member from the boat “My Pearl from Curacao” who fell inside the boat hitting his head and was rendered unconscious for a couple of minutes. Organiser Laurent Petit said the crew member recovered and was fine later.
The total tally for the day (provisional) was three White Marlin releases, 10 Blue Marlin releases, one Spearfish release, two Mahi Mahi, four Wahoo, and one Yellowfin Tuna.
“Fishing conditions were very good today, better than last year, “said co-organiser Stéphane Petit. “Not a lot of Sargassum which was great for the boats.”
Fishing continues today and Saturday. There is no rest day this year. Some 30 boats are taking part in the tournament from around the Caribbean region.