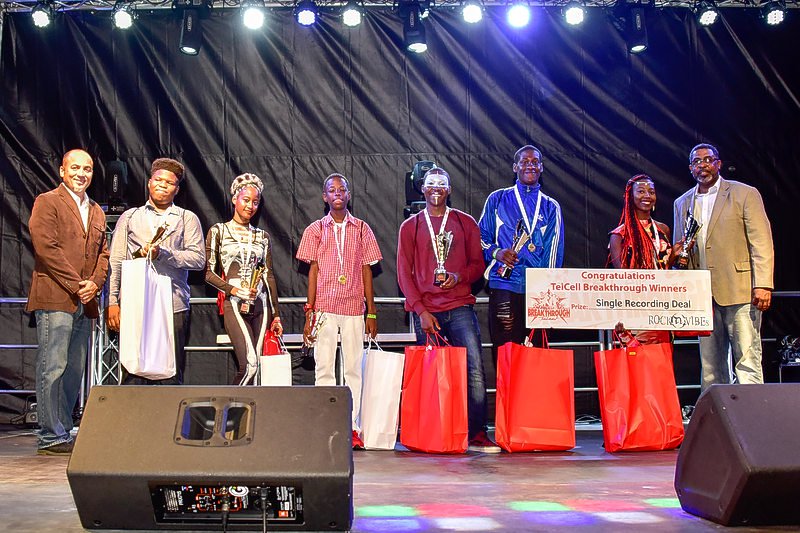 At the end of the competition Sinatra Bauld emerged winner of the Vocals category; Shakim York won the Rapping category; Temaia Dennis the Spoken Word segment; Manukiell Edwards won the Dance (Urban) segment; Jeremiah David the Dance (Technique) category and Tyler Percival the Instruments category.
Second place went to Quon Gordon for Singing; Niky Jean “Dice” Charles for Rapping;
Timothy da Silva for Dance (Urban); Ingemar Arndell for Dance (Technique) and Gershwin Busby for Instruments.
A number of individual awards were also presented. Most Developed Artist went to Stefanas Waakzaam; Best Team Spirit to Roan Soriano; TelCell SMS campaign winner was Dennis; Most Creative Performance and Producers Pick went to Percival and Best Promoter went to Jason Brice.
The winners will be the toast of TelCell for the next year with the TelCell Breakthrough winners already booked to assist the company with promotional spots along with promotion of their own performing schedules. The winners will also be featured on posters around the island delivering their own personal messages to their peers in schools and in the community.
They will top their year by collaborating on a CD and music video that they will write, perform and produce by themselves with the assistance of the show’s co-organiser and Producer Berteaux “Mr. Rude” Fleming of Xtratight Entertainment.
TelEm will also be sponsoring a recording deal for the second place winners so that they too will get a chance to collaborate on their own CD.
TelEm Group Chief Executive Officer (CEO) Kendall Dupersoy and Chief Commercial Officer (CCO) Brian Mingo congratulated the winners during the awards presentation ceremony held at the end of the event. “I am so impressed that we have such talent amongst our youth on St. Maarten and I am especially proud that our mobile provider TelCell is helping to showcase that talent,” Dupersoy said.
TelEm Group said in a press release on Sunday that the event was its “biggest and best” show to date, noting that the event was attended by an “emotion-packed” audience. “Once again the performance brought the audience to its feet and some to tears, with all youngsters performing at a very high professional level – leaving the panel of judges with a lot of work to do to select the winning acts,” the company said.
Co-organiser Angel Richardson said the decision to continue with the show this year despite having to move the venue due to hurricane Irma paid off “with some really, really great acts and our best audience yet.”
Organisers also congratulated the team of volunteers and sponsors who have played a part in making the event “the number one” youth event in St. Maarten.
“We could not do it without the performers, the audiences, the sponsors and most of all the volunteers who are so passionate about keeping the TelCell Breakthrough energy going throughout the entire year, and every year for the past five years,” Richardson said.
She said two new sponsors have come on board on the strength of Saturday’s show alone. “We are very, very pleased and we want to thank TelEm Group management once again for backing this event for St. Maarten’s youth, who have once again hit the ball right out of the ballpark so far as their talent goes,” she added.