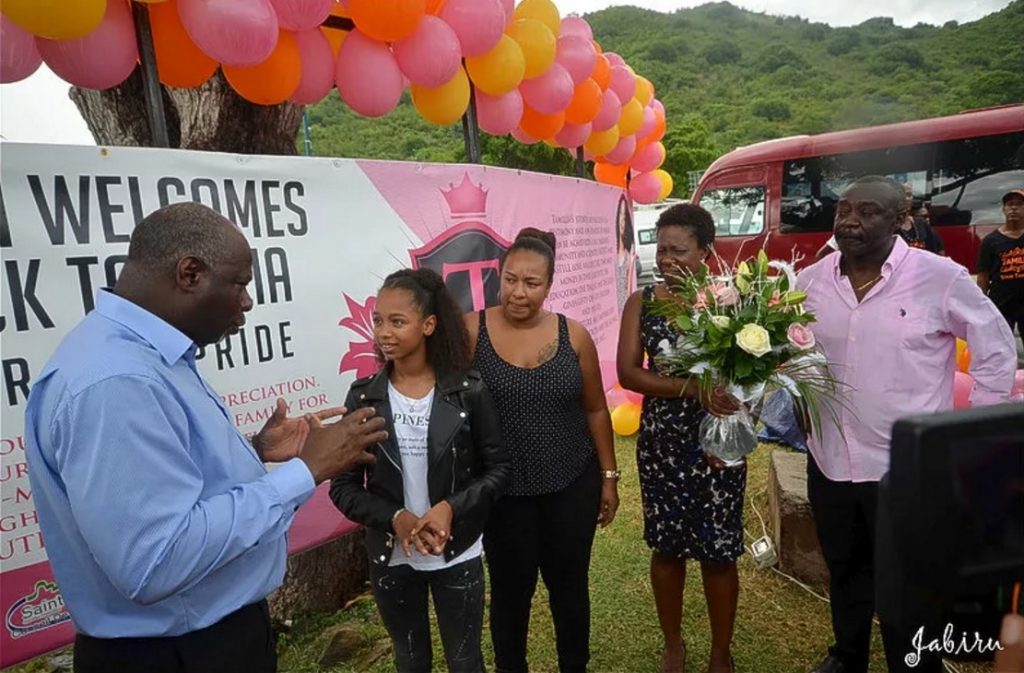 MARIGOT — Tamillia Chance returned to the island Monday to an unprecedented welcome after her sensational appearance in the final of France’s TF1 Voice for Kids talent show that took place in Paris on Saturday, October 8.

Surrounded by her Team Tamillia Chance entourage, her achievements were celebrated with a VIP reception at Princess Juliana Airport organised by the St. Maarten Tourism Bureau where she was presented with a trophy, bouquet of flowers and serenaded by steel pan music.

The French side’s Territorial Councillor for Culture Rolland Questel was also there to congratulate the singer.

Then it was on to Marigot in the rain where a giant banner was unveiled in her honour on the Bellevue roundabout, an initiative put together by three districts, five, four and six, where she was presented with a plaque. Senator Guillaume Arnell and President of the St. Martin Tourism Office, Jeanne Rogers-Vanterpool, were among the welcoming committee there.

Next and final stop was La Samanna where an informal reception and press conference was organised.

Few youngsters can boast having their own tour bus, a presidential campaign style-bus with her likeness pasted onto the side, her own website and a whole social media network driving what already looks to be a very promising future.

At just 12 years old Tamillia is clearly a star in the making. Despite accepting second place, losing in the final to a seven-year-old girl called Manuella from Montpelier, she made a huge impact on audiences.

Her mother Dianique Chance, a former singer who knows the business and has the contacts, points out the publicity and the exposure has been invaluable and sets the stage for even more exciting things to come.

“It has really opened doors. The next morning emails were coming in from everywhere but we can’t talk about that yet,” Dianique says. “Opportunities are there. Even the USA was interested but we couldn’t do both at the same time. Tamillia is very motivated, determined and very grounded. She knows she’s a role model for the Caribbean so she’s working hard to build a career. She’s doing very well at school too.”

Asked what she thought of the whole experience, Tamillia replies: “It was a wonderful experience and everyone was very kind, like a big family. I met a lot of people and got to show France my voice. It’s given my career a boost.”

And what about the nerves, singing live, knowing that millions of people are tuning in and voting?

“It was hard but I just kept telling myself to be myself and it will work out and that’s what I did and I got through.”

To put things into perspective Tamillia reached the final out of an initial 10,000 hopefuls from Italy, Spain, Portugal, Canada and other countries. It all began last year when she entered the pre-auditions for The Voice which required first sending in a video upon which she was selected to pre-audition in France.

That led to selection for the blind audition for The Voice and several trips back and forth to deal with the preparations.

“I ended up quitting my job to follow my daughter’s dream and took it on myself to deal with the financial and management side,” Dianique disclosed.

Sixty were selected for the blind audition and only 36, including Tamillia, advanced. Those who advanced were put with three coaches. Each coach had 12 kids to prepare for the singing battles.

Tamillia sang against two other girls in her team, singing one song that was shared. The coach decided who was better and it was Tamillia who advanced to the semi-final where she chose to sing Ed Sheeran’s “Thinking out loud.”

That performance was good enough to send her into the final where she selected a song called “Are we awake” by French singer, Tal. This song was chosen as it has French and English lyrics and represented her bilingual, island background.

Strangely, the Caribbean was not allowed to vote in the final, leaving only France to vote.
“We’ve had tremendous support financially for the trips as Tamillia advanced in the competition,” Dianique adds. “Different companies got involved, St. Maarten Tourism Bureau stepped in, and it was just crazy. We saw one island come together for this. It was amazing.”

For now Dianique is keeping a tight lid on what happens next.
“It’ll be a surprise. For sure it’s not stopping here,” she says.