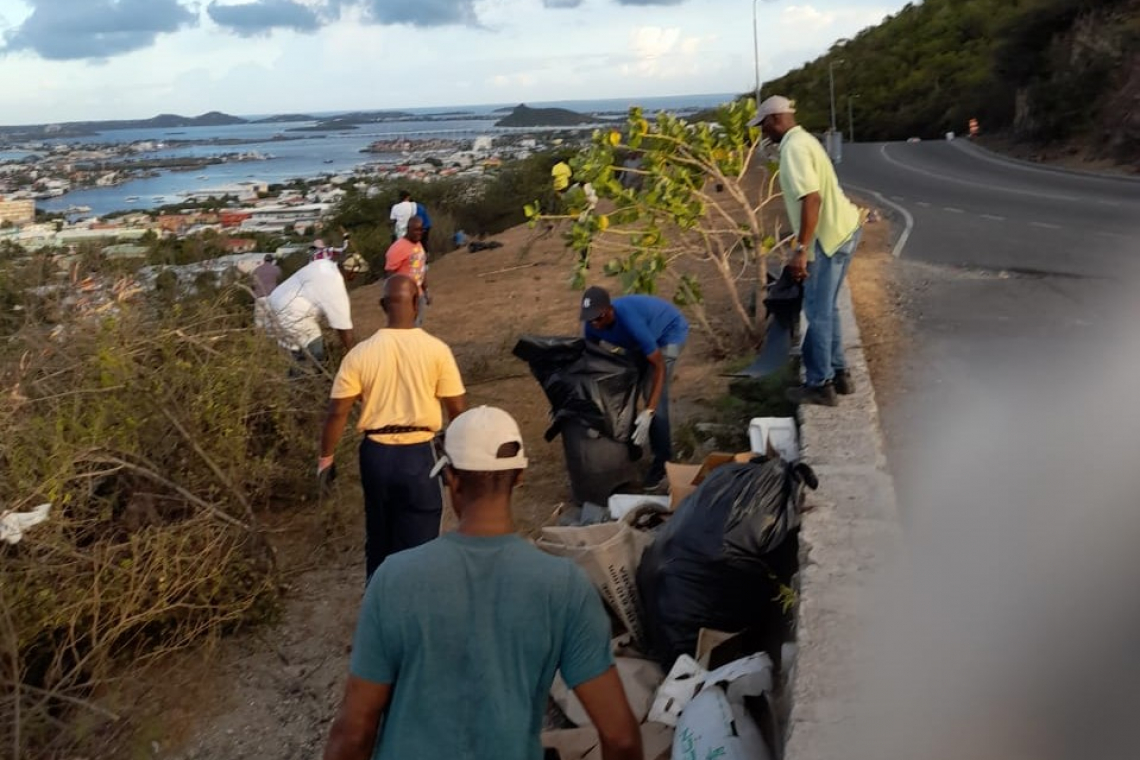 Taxi drivers were out in force Saturday morning to clean up the immediate area around the Harold Jack Lookout Point.

COLE BAY–A group of taxi drivers representing the Dutch St. Maarten Taxi Association, Airport Taxi Association and Downtown Taxi Association rolled up their sleeves Saturday, to clean up Harold Jack Lookout Point on Cole Bay Hill. They were assisted by several colleagues from the French side of the island.

Cole Bay Hill is the ideal spot to view the island. A regular part of sightseeing tours, Harold Jack Lookout Point is visited from sunrise to sunset by visitors to admire the scenic overlook and take panoramic shots of Simpson Bay, Philipsburg, and Great Bay, and catch a glimpse of Saba, St. Eustatius, and Anguilla. Many locals also stop at the Lookout Point to take in the scenery.

After collecting a lot of the litter himself, Ashton Gumbs of taxi 444 brought public awareness to the eyesore on Cole Bay Hill. Saturday, he got help from members of three taxi associations. The taxi drivers were dismayed to see the amount of waste. “It is evident people dump bags of garbage in this area,” they said. “Citizens of St. Maarten should be cautious of how their actions effect tourism, the island’s main industry.”

Amongst the rubbish many face masks, plastic bags, glass bottles, napkins, foam food containers, cardboard boxes and some debris from Hurricane Irma were removed. The cleaners also found that a lot of debris may have come from passing trucks. “Materials are often blown off onto the hillside.”

On Saturday, it took two dumpster loads and four trucks to remove the amount of rubbish that the taxi drivers were able to take on. Thanks to the teamwork of the taxi drivers, visitors can now take photos without rubbish being a background highlight.

“Unfortunately, the lookout point is still riddled on its hillside with rubbish in areas that were difficult to get to,” the taxi drivers said.  The taxi associations are looking forward to continuing their clean-up efforts.

The taxi associations expressed their appreciation to all of the members who came out and made an enormous dent in the litter. “Thank you to Lucas for bringing us water, Khalil of 88.3FM for helping and Mr. Peterson for the dumpster. A special ‘thank you’ to Ashton Gumbs of taxi 444.”

The taxi drivers were also out in force on Sunday morning to collect trash near the entrance to The Towers at Mullet Bay, where visitors of Mullet Bay beach often park their cars.