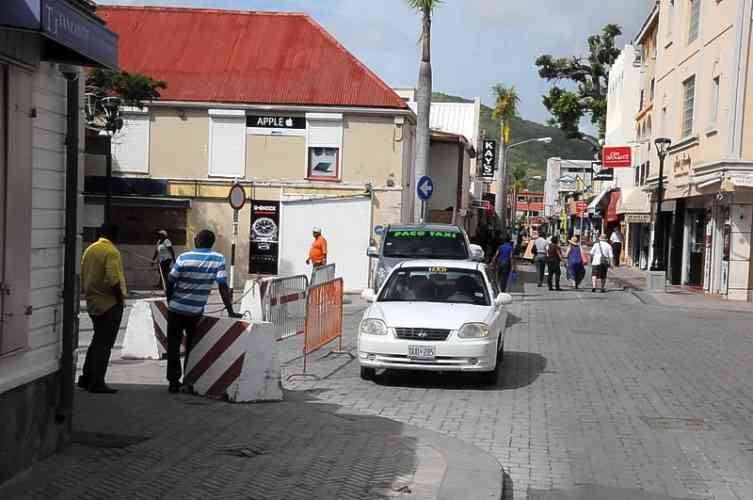 Taxis parked in front of the Philipsburg Courthouse on Monday morning.

PHILIPSBURG–The Ministry of Tourism, Economic Affairs, Transport and Telecommunications (TEATT) Inspectorate announced last week that all vehicles, including taxis, are prohibited from parking in front of the Courthouse at Captain Hodge Wharf as of Monday, December 4. However, taxis parked there anyway.

Controllers were visible in Philipsburg on Monday and walked by the taxis parked in front of the Courthouse while controlling businesses.

Taxis will have to make use of the normal line-up area between the public paid parking lot and RBC Bank. The parking lot in the rear of the former Government Administration Building will be used as a staging area for overflow taxis.

Government Taxi Dispatchers will man both these stations and all dispatching will be done via Taxi Dispatchers on site. All taxis are to abide by the line-up system and await their turn to be dispatched.

Taxi drivers are to remain with their vehicles and soliciting of tourists is not allowed. Control Unit and Casino Control officers will also be supporting the dispatching process to ensure that law and order are maintained and dispatching is done quickly.

When contacted by The Daily Herald about taxis still parking in front of the Courthouse, the cabinet communications team said that, as with everything new, it just takes a little enforcement and getting used to.