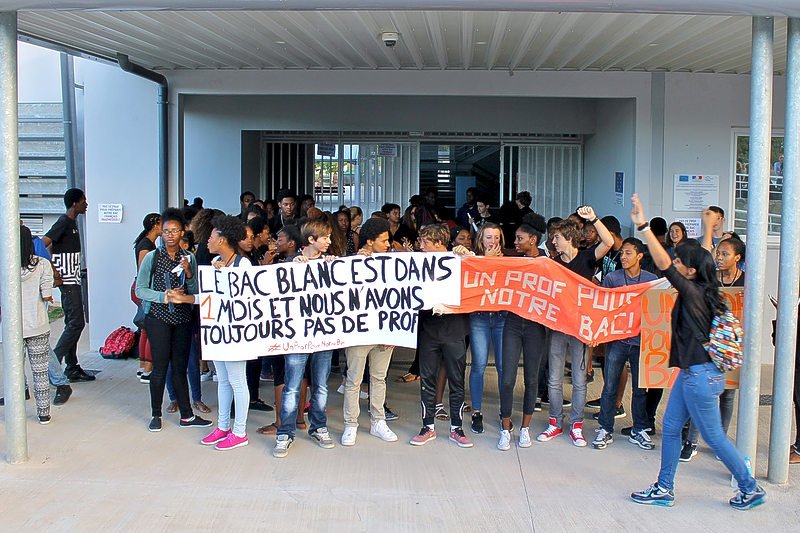 MARIGOT—Lycée students at Cité Scolaire studying for their Baccalaureate exams vented their anger at not having a permanent teacher for months by blocking the main entrance to Cité Scolaire in La Savane early Wednesday morning.   The Collège was open as usual but classes were cancelled for the Lycee.

The demonstration began at 6:30am and finished at around 10:30am when a solution was found. The protest was peaceful but loud and Gendarmes and Territorial Police were present as a precaution.

Many of the students held up hand written placards spelling out their grievances. The main concern students had is that in one month’s time they have to take a “Bac Blanc” which is a preliminary test to evaluate where they stand with their studies, but this will be impossible without a teacher.

“There has been no teacher since September,” said one parent. “A female teacher was supposed to be assigned but she never showed up, in spite of the school promising she will be doing the job. Then another teacher came just for one month as that was only a temporary solution.

“It’s just terrible organisation. The students shouldn’t have to be put through this for such an important exam. They were right to protest and they sent a strong message. Some of the students were chanting ‘give me a teacher’.”

Discussions ensued immediately between Recteur’s representative Michel Sanz, his superiors in Guadeloupe, a representative from the Collegé, and Cité Scolaire Principal Frantz Gumbs.

Frantz Gumbs told this newspaper after the protest Wednesday that he has been informed by the Rectorat in Guadeloupe that a teacher has been appointed to replace the original teacher, starting Monday.

It was not completely clear from the Rectorat how the situation arose.