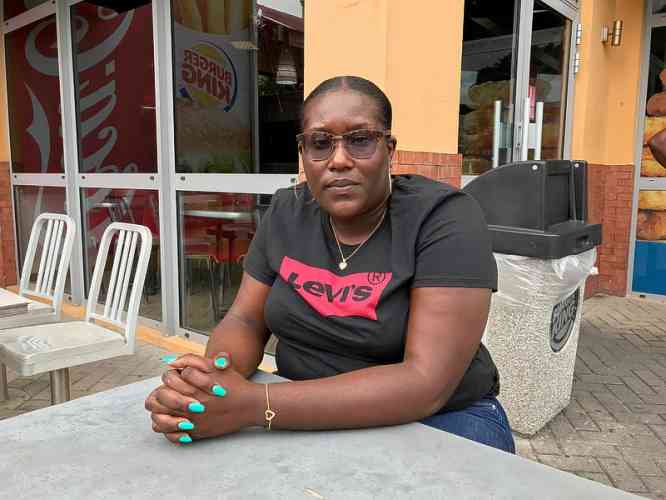 MARIGOT–Primary school teacher Bianca George is demanding an apology from Hashtag boutique in Marigot and wants her name cleared after the store owner posted a surveillance camera screenshot on Facebook of George and three other women in the store with a caption accusing them of shoplifting. The Facebook post caused a storm on social media with calls to boycott the Hashtag store.

The alleged theft of a ring occurred around 10:30am Thursday when the four women were window shopping on Rue General de Gaulle. The rings in the Hashtag store were in open view next to a cashier’s desk with 10 attached to an upper bar and 10 on a lower bar.

George admits to looking at the rings with the others, but vigorously denies stealing. She says none of the rings were removed from the bar because they were tightly attached. The women left the store without buying anything. It was not until much later, at 4:16pm, that they heard from friends that their photos had been posted on Facebook with an accusation of shoplifting.

“We went back to the store and demanded that the Gendarmes come to the shop to review the surveillance tape,” said George. “The shop-owner said that one of the rings was missing from the lower bar. The owner said from the time we left the store to the time she looked at the tape, about an hour, no one else came into the store and we were the last ones to look at the rings.

“But the Gendarme told the shop owner that he didn’t see anything on the tape that showed a ring being clearly stolen. We came back to the shop in our same clothes and backpacks so they could search us if they wanted to, but they didn’t.

“Because we were the last ones in the shop, the owner assumed we had stolen the ring without any proof. I asked the Gendarme why the shop owner is accusing someone of taking something that she cannot justify. The Gendarme replied it was a suspicion. I said, ‘If it’s a suspicion, does that give her the right to put someone on social media and damage their reputation?’

“The shop says it has suffered a lot of shoplifting lately, but did they post other people they were suspicious of on Facebook? No, only us.”

The women say they have not received a proper apology from the Hashtag store and their attempt to file a complaint with the Gendarmerie on Friday morning was not taken seriously. George said the Gendarmes to whom they spoke had said that a complaint would not get anywhere, and the Gendarmes only get involved in social media matters if a life is threatened.

Hashtag has since removed the post, but the women say the damage has already been done, directly or indirectly.

Hashtag then issued another post which appeared to be an attempt at damage control, saying, “On July 18 we have once again suffered a disappearance of merchandise. We wanted to publicly express our discontent because we are experiencing this very frequently.

“We posted screenshots from the surveillance video in the hope of finding the possible author of the act. We did not mention names but simply to say items in the store are not free. If the client maintains that there has been no theft committed and if this is true, we will trust the honesty of this person. We don’t want to share a hate message, as there have already been many of them. At no time has staff in the shop taken a racist attitude against these clients. We have clients of all nationalities.”

The women said they do not accept this statement as an apology.

The Hashtag owner told The Daily Herald later that she believed it had been a mistake to put the photos on Facebook so quickly. “I was very angry, because this is happening so often,” she said.

“The women said I accused them of stealing because they were black, but it was nothing to do with colour or physical looks. I am of mixed ethnicity myself and we get customers in here of all nationalities. It is my store and I was not happy. A ring does not walk out of the store by itself. When they came in, I was attending to other customers so I was not focused on them.

“I am not racist, but they made that race argument and were very aggressive. One of them broke down emotionally and I hugged her saying we can work this out. That night I had about 300 comments saying I am going to be killed and my store burnt down. What can I do? I cried all night. If I apologise then it means they were right and didn’t do it. But I wanted her to know I know. I’m not convinced the ring was not stolen.”