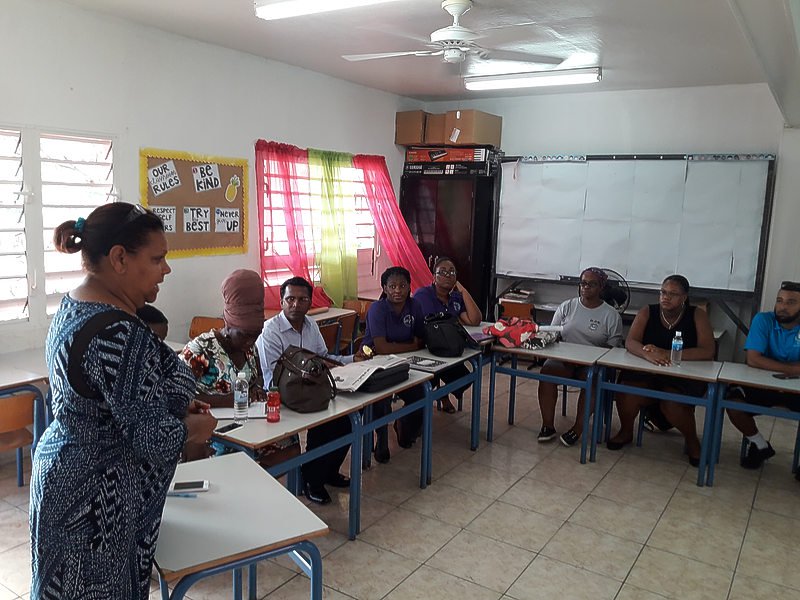 PHILIPSBURG–A number of public school teachers have expressed dissatisfaction over the move by authorities to extend the school day by one hour and ten minutes, from 12:50pm to 2:00pm, calling the move inhumane and inconsiderate.

Public school teachers are also dissatisfied with the move by authorities to offer them the option of having a one-month salary advance as hurricane relief, which they will have to repay over the course of the 12 months of 2018.
Windward Islands Teachers Union (WITU) President Claire Elshot told The Daily Herald she had received a number of calls from public school teachers expressing the same concerns. She met with teachers of Dr. Martin Luther King Jr. School and Leonald Conner School on Thursday, but could not hold her scheduled meeting at Ruby LaBega School yesterday due to time constraints.
During the meetings teachers signalled their dissatisfaction with the move by authorities to extend the school day. Elshot said the first concern was that the extension of the school day had not been properly communicated to teachers. Some read about it, some heard it on the radio and some heard it via other means.
She said teachers initially had been told that schools would resume with them working from 8:00am to 12:00pm. Then all of a sudden on Wednesday some learnt that as of Thursday, the school day would be from 8:00am to 2:00pm. Teachers would be required to be in school from 7:15am and school would start at 8:00am. School would be dismissed at 2:00pm and teachers would be required to remain in school until 2:45pm after all pupils leave.
Elshot said the lives of many teachers are still “not in order,” as they too were seriously affected by Hurricanes Irma and Maria. Some lost their roofs and homes and are still busy with insurance and other matters in an effort to get their lives back on track. Some teachers also live in districts where there is still no electricity and water and they believe that extending the school hours at this stage gives them little time to do what they need to do after school.
“Teachers are trying to cope with their own losses,” Elshot stressed. “And the extended hours caught them by surprise because they learnt of it from one day to the next. They really don’t understand it. A lot of them also have children and they need to get home for their children. The extended hours are inhumane in the sense that at this point it is not necessary.”
She said also that even though school has reopened, work is still being done on the roofs of some schools with no consideration for the safety of students and teachers.
Elshot said even teachers who did not suffer any losses during the hurricane are in solidarity with their colleagues on this matter. “We would have to take certain drastic actions for people to see that teachers are humans,” she said.
Some parents were also not aware of the change in school hours and showed up to pick up their child(ren) at 12:50pm on Thursday, only to be told the new dismissal time is 2:00pm.
One major concern at Dr. Martin Luther King Jr. School were reports that school buses did not pick pupils up from school when it ended at 2:00pm on Thursday and pupils were seen wandering the streets when teachers were leaving.

Relief
Another bone of contention for teachers is the fact that they are being offered what they consider a loan in the form of relief. Elshot said while workers on the lower end of the salary scale (from scales one to five) have received a relief of NAf. 750; persons who are above scale five, which includes teachers, have the option of requesting a one-month salary advance, which they can repay in any increments between January to December 2018.
“This is a loan. It is not a relief for teachers,” Elshot contended. She said teachers had been given relief of NAf. 1,000 and NAf. 2,000 in the past when they had additional hurricane-related expenditure, but now they are being offered loans.

Disorganised
Teachers were also concerned that proper planning was not done for the reopening of schools. While questionnaires were made available for parents to fill in, teachers did not know what to tell parents, the union president said.
Many teachers from various schools said when they approached their school managers for information, the school managers told them they were just relaying information that they had been given and they could not respond to the teachers’ concerns.
Some teachers also indicated that they initially had learnt that meals would be provided for pupils and teachers, but when the meals were delivered they were told not enough had been delivered for pupils so teachers could not get any.
Elshot met with the WITU board on Thursday to update the board on the teachers’ concerns. The union will be putting these concerns in writing and submitting this to Minister of Education, Culture, Youth and Sport Silveria Jacobs. Elshot called on Jacobs to have some compassion for teachers and to revisit the extended opening hours and the relief loan that is being offered to teachers above salary scale 5.