Home Local News Team Gibbs on runaway train to victory, but falls short of an... 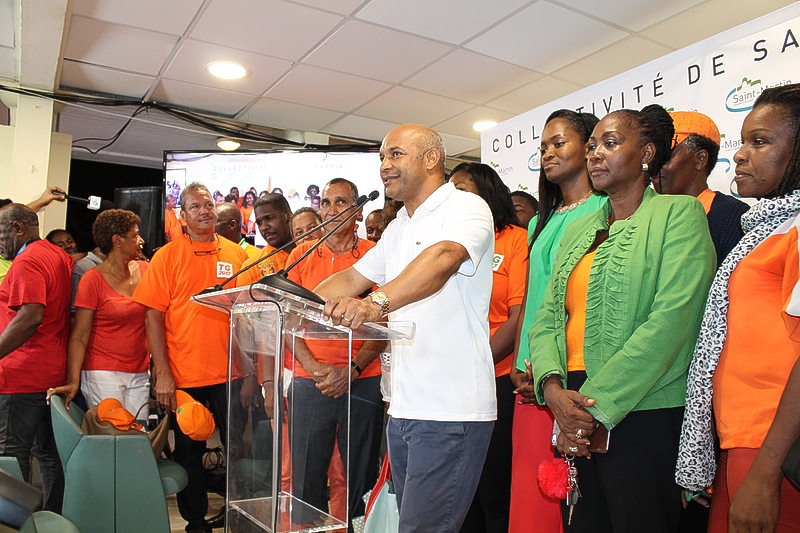 MARIGOT–Team Gibbs 2017 came tantalisingly close to winning the Territorial Council Election outright in the first round last night, but fell short of securing the additional 25 per cent of votes from the total of registered voters to be declared the winner, managing only about 20 per cent. This was due to the extremely low turnout of voters.

Despite winning more than 50 per cent of the votes cast, the first requirement for success, Team Gibbs will ride this wave of euphoria and seek to keep the momentum up from supporters going into the second round next Sunday, March 26, to seal victory.

Jubilant supporters waving orange and green flags crowded into the area in front of Hotel de La Collectivité where giant screens were erected to show the results, cheering each time Team Gibbs won a district. When all the results were in supporters drove around the block, horns blaring.

Team Gibbs won 4,077 votes, vastly exceeding the expectations of most pundits. He won by huge margins in each of the 19 polling stations, not conceding even one.

In second place was Louis Mussington’s “Movement for Justice and Prosperity” (MJP) with 1,141 votes, closely followed by Alain Richardson’s “Marching towards Progress” (MVP) with 1,026 votes. Many rightly believed that MJP would be a strong contender in this election.

These three parties, Team Gibbs 2017, MJP and MVP will contest next Sunday’s second and final round.

Daniel Gibbs’ supporters were shouting “One Shot, One Shot!” but in his victory speech he said it might look like a “one shot,” but there is still a week more of campaigning.

“St. Martin has given us a very, very comfortable advance,” said Gibbs. “The message was loud and clear that the population wants Team Gibbs in power. We’ll keep on doing what we are doing and try to convince more voters to join us. Already this is a very nice gift to be so far in front, and it is because of the team behind me. This the result of five years’ work paying off tonight.”

Louis Mussington said in his speech that Gibbs might have “won the battle, but not the victory.”

“I want to thank everyone that supported us. I strongly believe victory is possible, but it means a lot of hard work on the field and elections are won on the field,” he said. “We will be hard at work as from tomorrow. I believe we have a good agenda and have the preparedness and experience to lead this country for the next five years.”

He declined to be drawn in to the question of working with another party, but said he was open to dialogue if the situation warrants it.

The candidates made a special mention of thanks to Aline Hanson for her 4½ years of service for St. Martin.

Alain Richardson was critical of the some 12,000 people who did not vote.

“Even though there were eight lists they could not come up with a choice,” he said. “What is clear is that those who caused this result are the ones that did not come out to vote. I want to thank all those who came out to vote for us. Regardless of what team wins at the end of the day it must be St. Martin that wins. We are not at a crossroads, but a new beginning. We fight for a future brighter than today.”