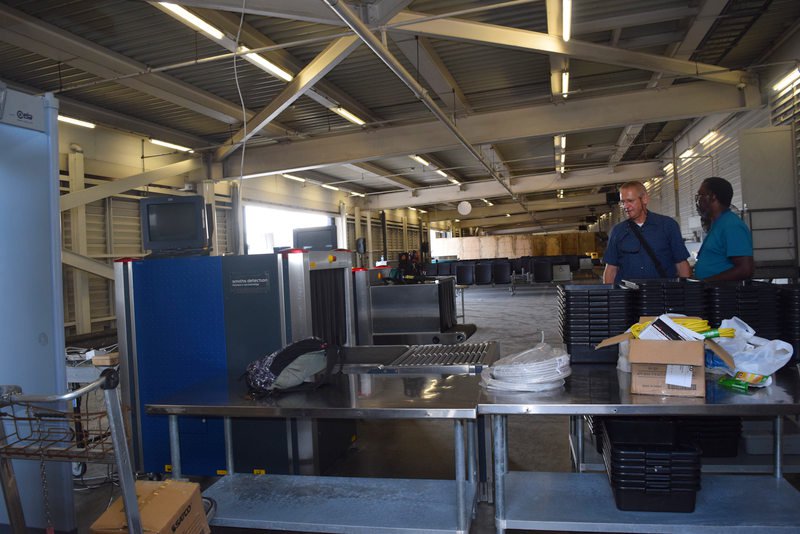 AIRPORT–The Dutch Army Engineer Corps took to repairing the Southern side of runway fence and a team of local contractors took to work on the Northern side. Together, they erected a fence enclosing Princess Juliana International Airport SXM, the first step that led to the return of scheduled commercial flights today, Tuesday, a month and four days after monster Hurricane Irma wrought havoc on the country.

Windward Islands Airways International Winair will operate the first official commercial flight when the airport reopens this morning. The first international carrier to bring in passenger post-Irma is Delta Airlines. That flight is scheduled to arrive after 1:00pm and will be welcomed by government and airport officials.
Airport recovery member Retired Lieutenant Colonel Jan Rooijakkers, part of the Dutch Civil Mission, told The Daily Herald the focus of team was on “safety and security.” Fixing the fence was at the top of the list. “For flights you need a fence … and as soon as possible. Also the Air Traffic Control tower,” he said.
To achieve that “soon as possible” goal, the army engineers joined the rebuilding process “to speed it up.”
The Air Traffic Control (ATC) tower was severely damaged by Irma and the Dutch Army Division called the “Pathfinders” swung into action to get relief and evacuation planes into St. Maarten. Their equipment for air traffic control is still in use and will help guide commercial flights in today.
“There is the capacity for small aircraft” with the available equipment. Parts and equipment are on order to fix the ATC, but it was important to get flights and no longer delay, he said. The revamp of the ATC will take six or more months.
The controls by the Immigration Department will also be carried out manually until a new computer and document-scanning system can be installed.
Every step taken in the recovery of airport operations has been checked and meets international aviation standard; if not, the commercial flights could not resume, he pointed out.
Getting the airport opened is a very essential part of the country’s recovery process. “It is natural for people to want to come back and everyone is needed in the rebuilding. … The teachers are needed, the nurses. Winair needed to bring its planes back. The country needs its people,” said Rooijakkers
He praised fellow team members Airport Chief Executive Officer Michel Hyman, Civil Aviation Head Louis Halley and Meteorological Department Head Joseph Isaac for their readiness and eagerness to get the airport up and running.
“The only way we could have gotten it done was together. That was the only possible way. Every suggestion or plan was met with enthusiasm by the team … every day the airport is getting better and better,” Rooijakkers said.
Passengers departing from and arriving at the airport will not be utilising the ultra-modern terminal building. That building was severely damaged by the category five-plus hurricane. Instead, contingency plans have taken shape in makeshift arrival and departure areas.