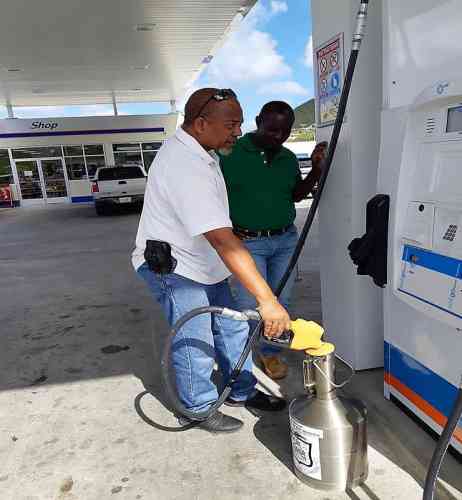 An economic controller calibrating a fuel dispenser in the presence of a gas station representative.

PHILIPSBURG–Five gas stations in St. Maarten were controlled to ensure proper calibration of fuel pumps by the Inspectorate of the Ministry of Tourism, Economic Affairs, Traffic and Telecommunication (TEATT) as part of a routine control last week.

Additional inspections were conducted to ensure that the price per litre is displayed in Netherlands Antillean Florins (NAf), which is the official local currency.

As part of the controls, inspectors are affixing special marks on equipment to help consumers recognise whether the establishment they patronise has appropriately calibrated equipment.

The controls are in keeping with Article 19 of the National Calibration Ordinance, in which it is stated that “the Inspectorate will be visiting commercial establishments throughout the year to verify that the weights, weighing and measuring instruments and dispensing equipment used in their businesses to conduct trade are properly calibrated.”

According to the Inspectorate, thus far five gas stations have been visited, namely two stations at Bush Road and stations at Sucker Garden Road, J. Yrausquin Boulevard and A. Th. Illidge Road.

TEATT Minister Stuart Johnson is again calling on businesses to ensure proper calibration of their machines and also to cooperate with inspectors.

“It must be clear that the inspectors do not have a ‘gotcha’ agenda and our goal is the protection of all consumers as well as businesses, as often the calibration being offset can mean that the business is selling more for less. We want to ensure that a fair price is paid for the right amount of goods,” Johnson said.

The ordinance mandates that sizes, weights, measuring instruments, fuel dispensers and weighing instruments located in places intended for or used for the conducting of trade must be (re)calibrated. The frequency depends on factors such as  usage and environmental factors.

Once (re)calibrated sizes, weights, measuring or weighing instruments are issued a “approval mark” that has a limited validity. Once successfully calibrated, a green inspection approval mark is applied. If disapproved, a red disapproval mark is affixed which is an equilateral triangle with perpendicular hatches on the inside. The need for recalibration is indicated by a yellow streak.

The sticker will indicate the next calibration due date. After this date has passed recalibration is required by law before the weight, size, weighing or measuring instrument can be used for trade again.

Consumers are encouraged to avoid making purchases when the equipment being used to weigh or dispense goods does not have the approved calibration marking and report this to the business owner. Consumers can also report the business to the Inspectorate of TEATT at tel. 542-4511, or via email at [email protected]. If possible, a photo of the disapproved object and the date and time should be included in the report.

“The public should take keen note, especially businesses that tampering, removing or falsifying of calibration marks, using, misrepresenting or attempting to misrepresent a disapproved object as an approved object carries a punishment of up to three years imprisonment and is categorised as a crime,” the Ministry of TEATT said.