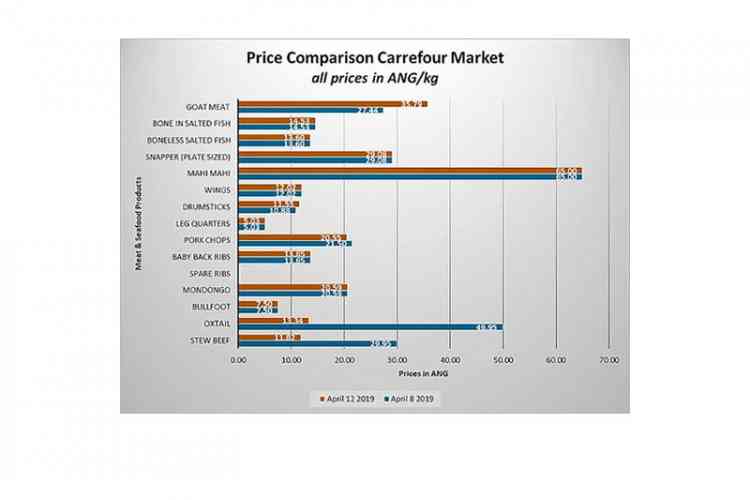 The price comparison at Carrefour Market, which was updated on April 12.

PHILIPSBURG–Ministry of Tourism, Economic Affairs, Transport and Telecommunications (TEATT) Inspectorate head Lucien Wilson said he stands by the findings of TEATT controllers with regard to price observations at Carrefour Market on April 8, 9 and 12, for government’s price comparison list.

He said in a press release that the Inspectorate had become aware on Friday, April 12, that Carrefour Market, which was featured in the April 12 publication of the price comparison list of Meat Products, had posted on its social media that “the retail price comparison done by Government of St. Maarten is wrong.

“They are taking the five-pound pricing from the shelf and putting it as kilogramme pricing. We have previously mentioned to them that they are not comparing the same products across supermarkets.”

According to Wilson, “We take allegations of this nature seriously. That is why we do our best to ensure in the preparatory phase that the information we will communicate to the public is accurate, transparent and timely.

“Likewise, the spreading of misinformation for unknown reasons must also be dispelled objectively as soon as practical for the protection of the consumer and to deter a breakdown of trust in the government by the public. To that end, moving forward we will also record price observations by taking a picture of the price as well, to increase transparency,” he said.

According to the release, all but one of the packaged meat products (goat meat) observed on April 12 had a packing date after April 9. Despite a more recent packaging date, the majority of the prices per kilogramme observed remained unchanged.

“All weights of the products observed were displayed in kilogrammes on the pricing labels during the observation periods of April 8, 9 and 12 as required by the National Ordinance on Calibration art. 6, paragraph 1. So, Carrefour Market was in compliance with the law. However, according to their social media post they are claiming that they retail these meat products based on price per pound and not price per kilogramme.”

The release said that in the pictures posted on its social media page Carrefour Market has not provided evidence that it sells the observed meat products by the pound.

“Additionally, Carrefour Market alleges that our price observations are incorrect even in those cases when they report the same price per kilogramme as listed in the price comparison list. Case in point: the price per kilogramme of salted fish (bone in and boneless) and bull foot in our price comparison list is the same as what they posted on their social media page on April 12, 2019.”

Wilson said, “We stand by the findings of my controllers with regard to the price observations at Carrefour on April 8, 9 and 12.

“We also consider the fact that our price comparison list garners so much attention as a positive thing. Our intention is to educate and engage the consuming public on exercising their buying power and to stimulate market competition by the power of the wallet. This is what causes retailers to respond. An educated consumer is a powerful market force. So, from the perspective of the Inspectorate, we view this as mission accomplished.”

The TEATT Ministry, via the Inspectorate, publishes a monthly price comparison of an expanded list of items (including items on the maximum price list) to show the comparative prices of items across various retailers in St. Maarten.

TEATT Minister Stuart Johnson says government monitors the cost of living and is doing what it can within its regulatory framework to assists consumers to make informed decisions based on a comparative price listing to use when shopping. Price comparison helps consumers to compare products across the market, reducing the amount of time searching and comparing, and ultimately get better deals.

“It is not the Inspectorate’s objective to suggest to the public that one product is superior or inferior in quality to another, but rather motivate the St. Maarten consumer to exercise their consumer power by making them aware that there are options in how and where they spend their money,” it was stated in a press release.

The most recent publication of the price comparison list it featured “meat and seafood” products from 10 food retailers. The price surveyor records the retail price of the item as indicated on the shelf or packaging supplied by the retailer, in the retailer’s establishment. This is the same retail price observed by the consumer. No calculations or changes are done to the price by the surveyor and they are published “as is.”

idez.enquiries@sintmaartengov.org or by visiting its offices at Juancho Yrausquin Boulevard #6 (opposite FairWay Mark It) if they have any concerns, complaints or suggestions.