Home Headlines & Top Stories TEATT to conduct impact study on use of plastic bags | THE... 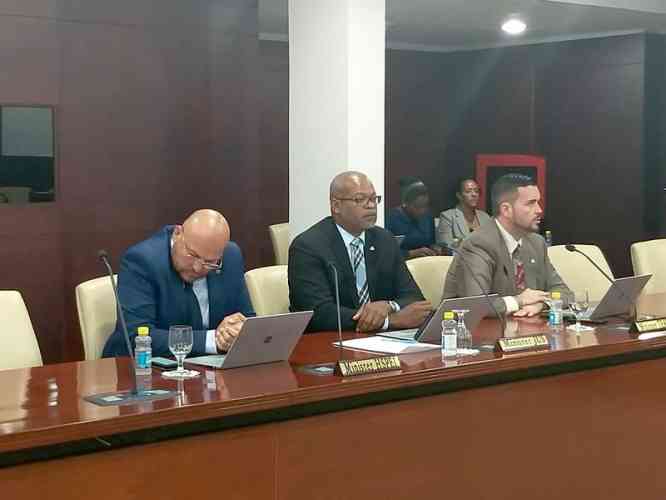 PHILIPSBURG–The Ministry of Tourism, Economic Affairs, Transport and Telecommunications (TEATT) will be conducting an economic impact study on the discontinuation of the use of plastic bags in the short-, mid- and long term as part of its efforts to support the proposed ban of these bags.

The Ministry will also develop communication strategies on the proposed plastic bag ban to include educating the public about the separation of garbage, TEATT Minister Stuart Johnson told Members of Parliament (MPs) during a meeting of the Central Committee on Thursday.

According to Johnson, in the ocean alone, animals such as seals, dolphins and seabirds are often seen tangled in plastic, and when the bag gets around their neck, it becomes difficult for them to move. This inability to move around freely results in them not being able to either feed or escape predators.

“It is also true… that plastic bags offer convenience to shoppers. However, unlike cloth and paper bags, these plastic bags do more harm to the environment and threaten our way of life. They are also an eyesore as they fly and get caught in trees and grass or are thrown in garbage bins then get flown around our streets,” he said.

“We here in St. Maarten will by no means be the first to ban, as we already know of Aruba and many others who made this bold move. We are merely doing what is best for our people and country by introducing a ban on plastic bags.”

Johnson expressed hope that citizens understand that the planned ban on plastic is being done to protect them and the environment. “We have an opportunity to contribute positively to protecting the environment by looking at how much plastic we use and paying attention to our ecological footprint… The Ministry of TEATT is looking at possible ways in which we can disseminate information to create awareness of the negative impact the use of single-use plastic has on our environment.”

Johnson believes that there should be a worldwide ban on plastic to make the earth a better and safer place to live. “Hurricanes are becoming more powerful and larger each year. Therefore, if there is even the smallest chance that we create the imbalance in the environment that results in the increase in these types of activities, then that is by itself reason enough to introduce the ban on single-use plastic bags and foster greater environmental protection.

“Putting a ban on single-use plastic bags and replacing them with recycled paper bags that are safer and biodegradable is the safe, and right thing to do. But introducing this law will not be our only task… We must ensure that this ban is strictly enforced and adequately policed to stop any violators in their tracks. This enforcement is the only way real change can be seen and felt.”

At the beginning of his opening remarks Johnson asked: How do we determine whether the different ways in which disposal of non-biodegradable items such as plastic can be halted if we stop using single-use plastic bags? He said the answer is putting a complete end to their use in Dutch St. Maarten, and working with partners on the Northern side of the island to bring legislation there that bans single-use plastic bags.

Plastic bags have what is called synthetic polymer, which is a substance that harms the environment, Johnson explained. It is not biodegradable, meaning that it does not decompose. Animals eat these bags, and it affects especially marine life. Once ingested, the plastic does not come out of the systems of these sea animals, and it does not allow other food to digest.

He alluded to a group called Ocean Crusaders, which published statistics that show an estimated 5.25 trillion pieces of plastic debris are present in the ocean. Today there is an estimated 270,000 tons of plastic floating on the surface of the waters of the sea and four billion plastic microfibers per square kilometre littering the deep sea.

It is believed that worldwide usage of single-use plastic bags per year is now at about 500 billion. It means that about one million bags are distributed per minute and the average person uses 150 bags per year, Johnson said.

Johnson said he considers this issue to be “a critical matter.”

Justice Minister Cornelius de Weever said Justice stands ready to support the development and the ban on plastic bags and littering of public spaces. He said also that the ministry will continue to be vigilant and assist in whatever way it can.

VROMI Minister Chris Weever said his ministry is working on environmental and nature policies. It is still being worked on and he could not give a timeline as to when it would be completed.

At the beginning of the meeting Chairperson of Parliament Sarah Wescot-Williams spoke of two draft national ordinances that exist on the issue. The first is an amendment to the nature ordinance submitted in April 2013, by MPs Frans Richardson and then-MP Johan “Janchi” Leonard. This was a national ordinance amending the law for the protection of nature in St. Maarten.

The second is an initiative national ordinance presented by Wescot-Williams, which aims to amend the general police law of 2013 to prohibit the use of plastic bags intended for single use and plastic straws. Both draft initiatives are pending a report by Parliament.

On Tuesday, May 17, 2019, during a closed-door meeting of the Central Committee of Parliament discussing pending national ordinances, it was decided that Director of Aruba’s Impact Blue Foundation Juliet Carvalhal would be invited to make a presentation to parliament on the issue. On Wednesday Carvalhal made that presentation on an exploratory study on the adoption and impact of Aruba’s plastic bag ban in the retail sector entitled “Beyond a plastic economy.”

Wescot-Williams said the route that Aruba took with respect to banning hazardous material from their environment began with a change to their general police ordinance banning single use plastic bags. After more than two years of the law being in effect, Aruba’s government is considering moving to a more general legislation with respect to plastic and other hazardous materials. She said the intention is to follow the route already taken by Aruba and learn from some of the practices and possible best practices from Aruba.