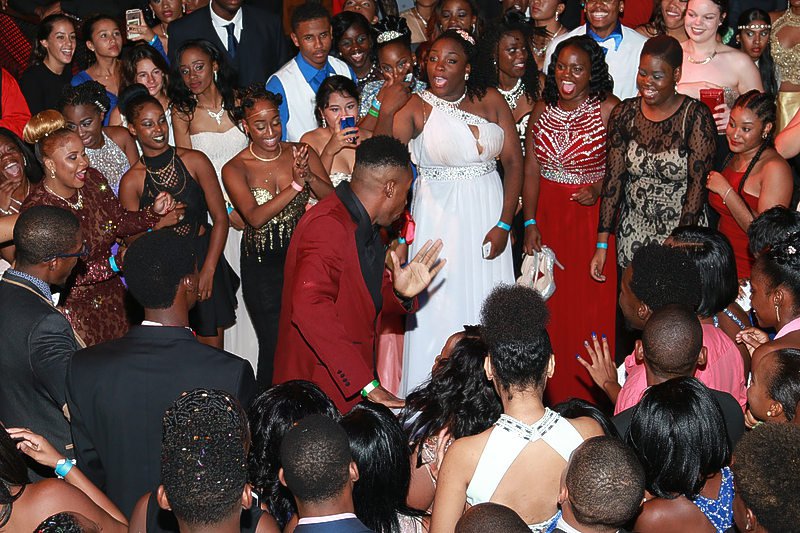 PHILIPSBURG–Teen Times, in collaboration with its main sponsor TelCell, hosted what the organisation called the “most epic Prom” in years on Sunday night at Tantra Nightclub and Sanctuary.

Almost 500 high school seniors descended on Maho to attend their exclusive, formal affair that featured special guest artists from the US, Miss Mulatto and Lil Fizz and celebrated 20 years of Teen Times hosting Prom Night on St. Maarten.
According to the crew of Teen Times, Prom Night is an exciting, successful event every year. This year, however, something was different. “Maybe it was the fact that it’s an anniversary year, but the energy this year was through the roof. The students went all out with the attire and Prom preparations, Tantra worked out perfectly for us. It was just an epic night,” Prom Coordinator Roosje Rommy said.
Epic indeed, judging from how the students arrived at Prom Night. Most pulled up to Tantra in luxury vehicles, some in vintage vehicles. The girls waited for the guys to open doors, the guys pinned their corsages on the girl’s wrists and the show was on.
The whole spectacle drew about 100 onlookers of parents and friends who simply wanted to see the students make their grand entrance to their Prom. They cheered and took pictures of the students as they walked by, adding even more to the Hollywood feel of the night.
Bearing the theme “Meet me In Paris,” Tantra was decked out by designer Dion Gumbs. Lighting and other effects were provided by Genesis Music Group and Bertaux “Mr. Rude” Fleming and music was provided by DJ Outkast for Prom Night and DJ King Kembe for the Prom after-party.
“The performances were very special. The students reacted very well to rising star Miss Mulatto and of course to Lil Fizz. Both stars took time to take pictures with the students and just be among them.
“King Vers was King Vers: He just was high energy and reminded us why we love Carnival so. Nobody cared that they were in a dress or a suit, they jammed,” Rommy said.
Radio personality Kevin “Suppa Kid” Petrona was the official host for the night and led the students through a couple of Prom games for which they won prizes from TelCell. A crew from TelCell was also present to assist the students in signing up for a new program that the company will soon be launching and for which the students that signed up will be the first to be part of.
“We would really like to thank TelCell for coming on-board with us to help make Prom possible. We appreciate what the company did for us and hope we can partner again in the future,” Coordinator of Teen Times Mike Granger said, adding that TelCell also provided smartphones, phone credit and other prizes for the Prom King, Queen, Prince, Princess, Best Dress and Best Suit.
Prom King Honours went to Leomar Vanterpool, Prom Queen was Leann Richardson, Prom Prince Shemar Bito, Prom Princess Mahealeney Kemper, Best Dress, Sharonah Franklin and Best suit Malik Richards. “They are all beautiful and filled with the Prom Spirit. They really were into it,” Rommy said.
Granger also made special mention of Management of Tantra Night Club. “It is almost becoming impossible for youth organisations to host events anywhere on this island that literally would not run that organisation into financial ruin.
With the lack of proper centres, Tantra is one of the places that we can turn to cooperate with us although they don’t have to,” Granger explained. “From the beginning they were open to the idea, stressed a non-alcoholic bar and were very cooperative with Teen Times.
Tantra even covered Lil Fizz’s cost for the after party for us. We desperately need a centre on this island but it is great to know that there are still some places willing to cooperate with our youth in hosting their events,” he added.
He also thanked the entire crew of Teen Times, all parents and students and the organising team and assistants of Prom Night in particular Keianna Liburd, Rochelayne Rommy, Rosina Lynch-Romeo, Janique Coram, Ulrieke Wouden, Kevin “Suppa Kid” Petrona, Rolando Brison and Shary Brunings.