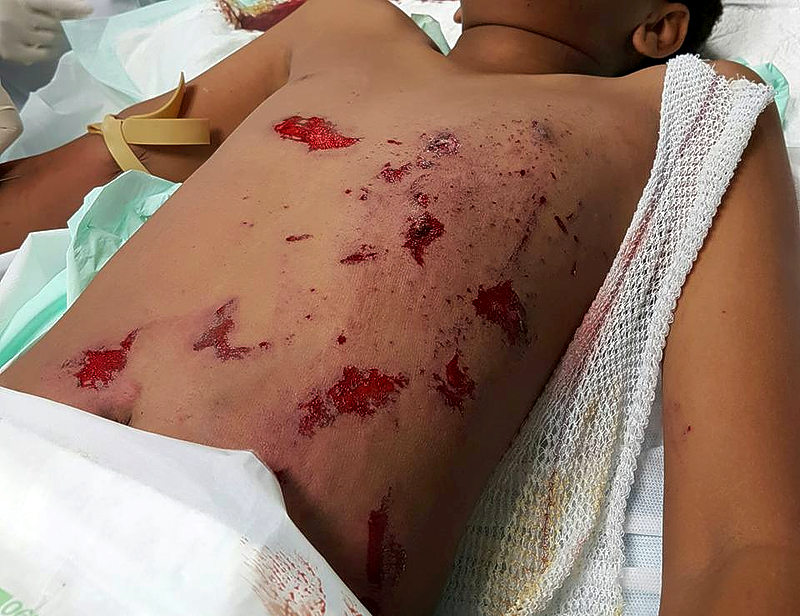 PHILIPSBURG–Word travelled quickly on Saturday evening of an incident involving a thirteen-year-old boy and fireworks that seemed to have been obtained illegally. When the boy was trying to extend the fuse of a firecracker that looked like dynamite, the firecracker exploded, severely mangling his hand and causing injuries to his body.

he Daily Herald understands that the boy had just arrived at his grandmother’s home when his father showed up and gave him the fireworks. The boy had not even lighted it when the explosion occurred.

The boy is the nephew of politician Claude “Chacho” Peterson, who was a candidate on the St. Maarten Christian Party’s list in the September election. Peterson posted a picture of his nephew on his Facebook account on Saturday, warning the public about the consequences of purchasing illegal fireworks.

He wrote, “I believe it is very safe to assume that many more of these fireworks, which in my opinion are sticks of dynamite, have been sold. The wick or fuse on these fireworks is only 2cm, which makes it extremely dangerous. They are packed with white powder which does not appear to be the usual black powder. I have been around fireworks since a boy and never saw anything like this. This to me looks like ‘sticks of dynamite.’”

Contacted by this newspaper on Monday, Peterson said, “I will not go into the details of how my 13-year-old nephew got hold of the fireworks, because I will be exploring possibilities of filing a complaint against the person who gave them to him and the people who sold them to that person. I will say that it is not our family who provided them or purchased them.

“As a result of handling these fireworks, one of the sticks detonated in his left hand. The explosion was so intense that it shattered a window at his house. It is very hard for me, but his fingers were blown off and his skin was torn off like pieces of paper. His entire hand was burnt and severely mangled.”

The family decided the same night to transfer the boy to the French-side hospital after he had been stabilised by the Dutch-side emergency staff that was very helpful, Peterson said.
“On the French side he was attended by a top surgeon in the French Caribbean. Yet the explosion was so extreme and the damage to his hand so significant that my nephew was operated on at 3:00am on December 31 and lost his hand,” he said.

Peterson also told this newspaper that he had visited the Firefly Family organisation that sold fireworks on the ring road in Philipsburg and, according to the business, it did not sell the type of fireworks that caused the accident. They also informed him that they had been warning about the sale of illegal fireworks by certain people in the public.

“Many who are selling are openly advertising their illegal sales on Facebook. Firefly advised me that many persons have been coming to them asking for the ‘dynamite’ fireworks. This only underscores the need for all the public to be on high alert,” Peterson said.

“Our family has rallied together to face this tragedy and give my nephew the support he will need to overcome this disaster both physically and mentally. He did not cry once and exhibited great strength and courage.”