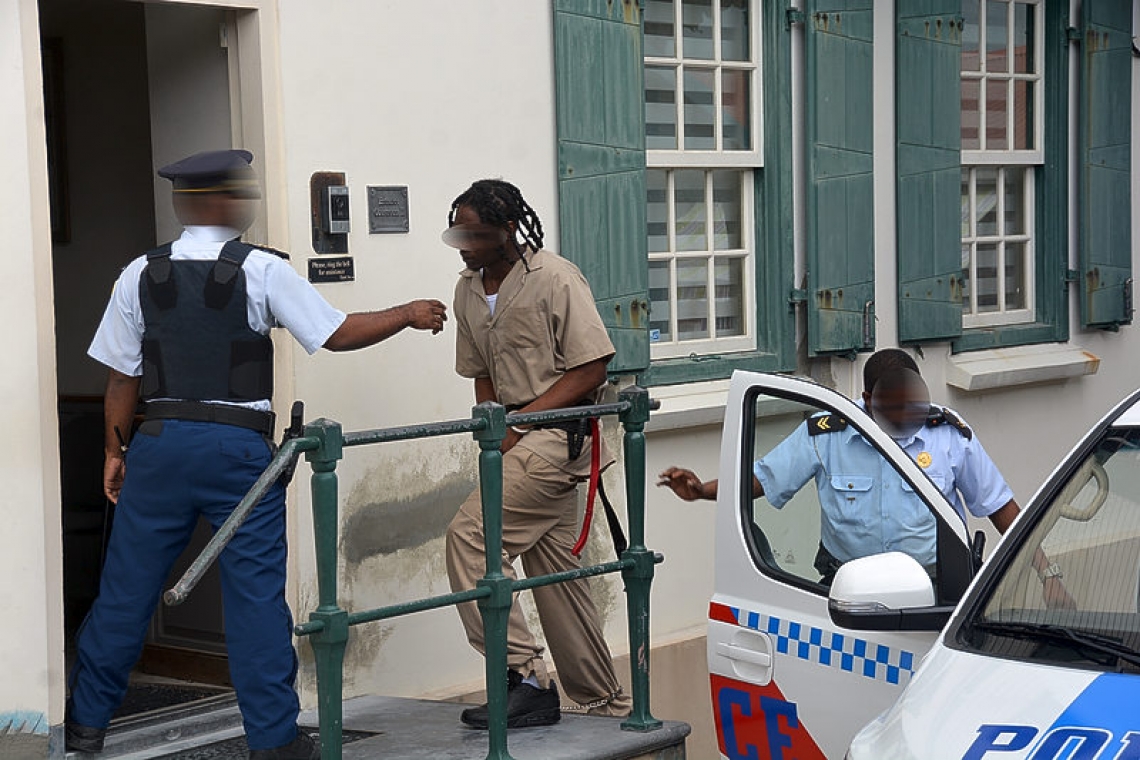 Guy Mathurin Samedi (19) is the main suspect in the robbery-homicide of a Canadian tourist on Beacon Hill Road near Maho on June 5, 2019. Police officers escorted him into the Courthouse on Wednesday, March 4.

PHILIPSBURG–The nineteen-year-old suspect who shot a Canadian tourist who was killed while trying to protect his daughter during an armed robbery in Beacon Hill on June 5, 2019, was sentenced by the Court of First Instance to eighteen years on Wednesday.

The Prosecutor’s Office issued a statement in which it said it was “satisfied” with the Court’s judgment in the co-called “Amazoniet” investigation.

Shooter Guy Mathurin Samedi and his accomplices Keeano Hastin Shandon Richardson (20) and J.S.E. (17) were all convicted for their roles in the fatal robbery.

The Prosecutor’s Office had argued that Samedi was the shooter, with which the Court agreed. Richardson was sentenced to four years’ imprisonment for providing the getaway car and a firearm while knowing Samedi had already been convicted of robbery for which he had done his time in prison in Guadeloupe. The Court lifted the suspension of Richardson’s pre-trial detention.

E. was convicted for his role in the armed robbery, which was to drop off and pick up the shooter so that he could commit the crime.

All defendants will also have to pay damages to the victim’s 19-year-old daughter amounting to Canadian $26,841.15. The amount includes $17,259 in loss of income.

“Robberies and prohibited possession of firearms are a major danger to the safety of St. Maarten and also result in several deaths and injuries. This is why the Prosecution Service, together with [Police Force St. Maarten – Ed] KPSM and all other government services, is working hard to counter these criminal offences and to track down and bring suspects to justice,” the Prosecutor’s Office said in a reaction.

Without any members of the general public in the stands due to precautionary measures taken by the Joint Court to protect personnel and visitors from the coronavirus COVID-19, the judge said he found it proven that Samedi had shot Canadian tourist Sylvain Valade.

Samedi and E. had each claimed during the investigation that he had been the driver of the getaway vehicle and that the other had been the shooter.

Based on evidence from video-camera footage, the court established that it was Samedi who had stepped into the car’s passenger seat shortly after he had stolen a bag from the victim’s daughter and had fired the fatal shot.

As the man’s head was shot from close range the court considered manslaughter, theft with violence, and illegal gun possession proven. Therefore, the defendant received a higher sentence than the 16 years demanded by the prosecution, which had considered theft with violence that had led to the victim’s death proven.

The Court attributed to E. a smaller role than the Prosecutor had done and considered him a “sidekick who could be blamed, if necessary,” rather than a full participant in the robbery. Therefore, he received a somewhat milder punishment.

However, the judge noted that E. could reasonably have foreseen the fatal ending of the robbery, “even though he would not have wanted the victim’s death,” it was stated in the verdict.