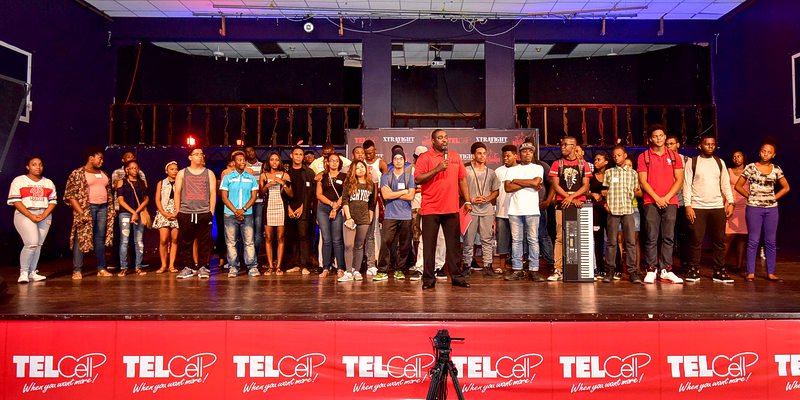 The contestants, 22 of whom will be strutting their stuff on the stage of Theatre Royale, Maho, for TelCell Breakthrough finals on September 30.

PHILIPSBURG–TelCell Breakthrough talent search judges once again had their work cut out as they ploughed through a host of entertaining auditions at the Philipsburg Cultural and Community Centre last Saturday. The search kicked off shortly after 8:30am with a record number of acts lined up to be seen and heard. By 4:00pm the judges and organisers had whittled down the huge number of performances to just 22 young men and women who will be taking to the stage at Theatre Royale, Maho, where they will vie to become TelCell Breakthrough 2017 winners. In a range of categories, including Dance (Urban and Technique), Rapping, Singing, Spoken Word and Instruments, the judges and organisers listed Leatton Douglas, Roan Norley, Timothy da Silva, Gershwin Busby, Bryan van Putten, Acquilla Carty, Ingemar Arndell, Jason Brice, Quon Gordon, Tyra Liburg, Jeremiah David, Niky-Jean-Charkles (aka Phreedom), Jandrick Hinds, Sinatra Bauld, Tyler Percival, Shakim York, Aiyaunty Romney, Temaia Dennis, Kirk Vital, Stefanas Waakzaam and Manukiell Edwards as finalists.

Co-organisers, Angel Richardson of TelEm Group and Bertaux “Mr. Rude” Fleming of Xtratight Entertainment were both “super-happy” with the results of the auditions, which both agree will make the fifth anniversary of the TelCell Breakthrough event a sure-fire success.

“We say it every year, but once again the acts were just amazing, with the quality getting better and better every year,” said the pair. They said the evidence of how tight the competition was this year is in the length of time it took to announce the contestants going through to the finals on September 30.

“We were scheduled to announce the selection after 2:00 in the afternoon once the auditions were closed, but we ended up making the announcement well after 4:00pm on Saturday,” said Richardson, who thanked judges, Da Lion, Cali, Betti V, La Rich and Dizzle Bueno for their hard work and professionalism.

Thanks also went out to the TelCell Breakthrough team partners, Cani TV E2P, Genesis, Music Group, the Philipsburg Cultural and Community Centre and all the hosts, sponsors, parents and well-wishers for their support.

“It was a long tough day, but the super talent on stage made it all the more worthwhile. Now it’s on to preparing for the finals on September 30,” said a very relieved Richardson.

She said there is a bonus to this year’s auditions in that the entire event was recorded and will be professionally edited so that performers, their families, friends and a wider audience overseas can witness their talent for themselves when the final product is posted as a YouTube video for everyone to watch.

Richardson has also informed that voting for favourite contestants for the upcoming finals will begin on August 26, when fans who are also TelCell subscribers can text their favourite finalist’s number to 8844.