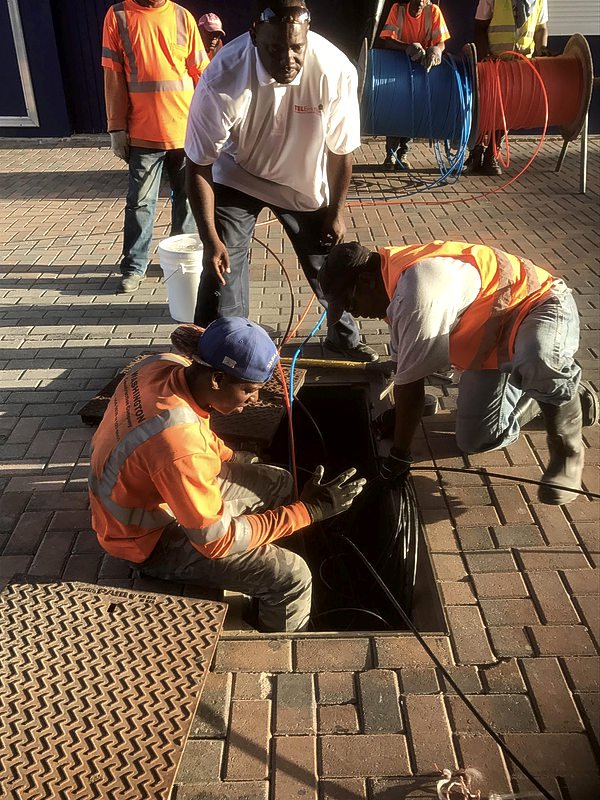 New contractors have been added to work teams on the island already working with TelEm Group.

POND ISLAND–TelEm Group Chief Executive Officer (CEO) Kendall Dupersoy says the company is well on the way to restoring its telecommunication infrastructure to pre-Hurricane-Irma status, thanks to the continued hard work of technical staff and the addition of local contractors and telecommunication experts from Curaçao.

Dupersoy said there are now 15 cell sites in full operation and 10 cell sites providing partial operation. “This is a vast improvement on the situation just three weeks ago when the last update was given by the technical team,” Dupersoy said.

Dupersoy is especially pleased that amongst the cell sites labelled “fully operational” are those covering important areas such as Princess Juliana International Airport SXM and surrounding areas, Porto Cupecoy, Cole Bay, Port St. Maarten and the Smitcoms Building at Harbour View in Philipsburg.

“Residential areas such as Belvedere, Pointe Blanche, Guana Bay, St. John’s and Cay Hill are also being fully provided with service by their respective cell sites,” he said.

“We have all hands on deck, including the help of additional contractors and expert help from Curaçao, to get these additional cell sites full up and running as quickly as possible, despite some bottlenecks created by a shortage of materials to work with and damage to our telecommunication cabinets in the field,” Dupersoy noted.

Progress slowed down during the past week when the technical team was forced to return to some cell sites they had repaired earlier to make those repairs more permanent. However, Dupersoy noted that a full schedule of work is planned for the coming week to get the restoration schedule back on track, including repairs to a broken fibre optic cable in Pelican and restoration work in Diamond Hill, Oyster Pond and Dawn Beach.

He is appealing to residential and business customers still awaiting reconnections to be patient in the knowledge that the company is doing all it can with the resources at its disposal to restore its services to pre-Hurricane Irma status in the shortest possible time.

TelEm Group Chief Technical Officer (CTO) Eldert Louisa said the company might soon be forced to make a decision on whether it will continue to operate a 2G mobile service, due to extensive damage to that platform and the high cost of restoring a telecommunication platform that was scheduled to be phased out soon anyway.

TelEm is leaning towards utilising 2G platform components to expand the recently launched LTE/4G platform for additional capacity while the possibility exists.

Louisa and Dupersoy said they will be keeping the Supervisory Board of Directors, the Shareholder and St. Maarten’s telecommunication regulator Bureau of Telecommunications and Post (St. Maarten) apprised of the latest developments and the extraordinary efforts that continue to be made by management and staff to restore the island’s telecommunication services to pre-hurricane standard.