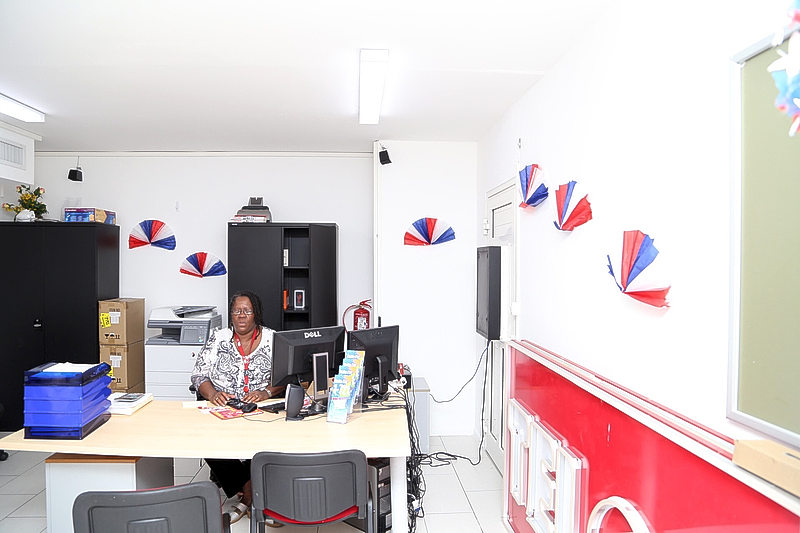 The colours of the St. Maarten Flag on display at the TelEm Group’s office.

POND ISLAND–In an effort to show their patriotism and share in the joy of St. Martin/St. Maarten Day, the TelEm Group has decorated its offices in the colours of the St. Maarten Flag: red, white and blue and has also adorned them with the flag.

Company vehicles were also decorated and staffers are displaying mini flag broaches and pins on their clothing to bring more attention to their celebration of the day.

TelEm Group workers and customers will be sporting St. Maarten Day T-shirts specially designed by local graphic artist Loic Bryan, which features a pelican and sun combined with a flag and telecommunication equipment in a creative motif.

TelEm Group’s Customer Relations team has received some encouraging words from customers and the public for their patriotic displays and the extra effort they have taken to promote the island’s national day.

The “TelEm Red Warriors” group has been preparing for one part of the day for the past several weeks – the annual St. Maarten’s Day Round the Island Relay Race.

According to race team member Jesus Richardson, the team went on a trial run around the island last week and were satisfied with their performance considering the limited time they trained this year. “We are seeking to improve on our time last year and we are confident we will do that,” Richardson said, urging members of staff to turn out along the route to cheer on the Red Devils and give them some much-needed support and encouragement.

The TelEm Warriors team captain is Shadira Lont, with Eldred Richardson as the Team Driver and Cresburk Brown as Team Support.