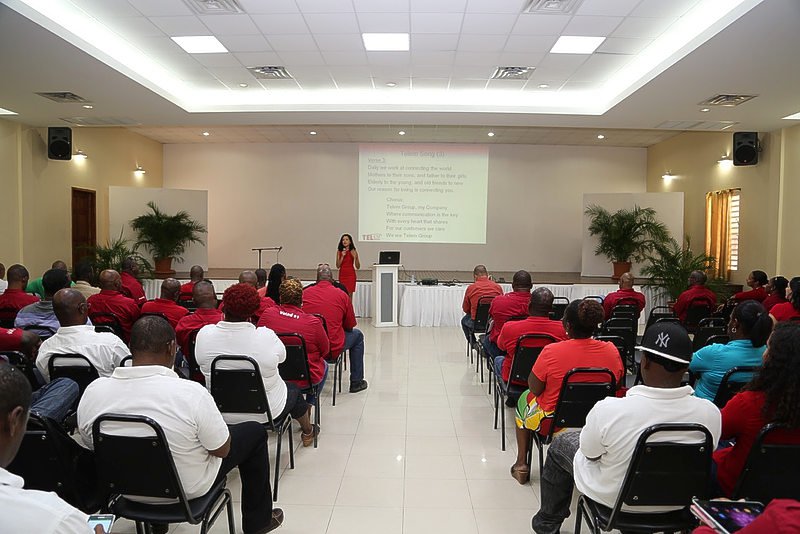 CAY HILL–The TelEm Group raked in a little over NAf. 6 million in revenues in 2015, which was less than what the company had budgeted for.

The Daily Herald understands that the company had budgeted to make at least NAf. 6 million more, but fell short due to factors such as residents using free Internet-based calling services such as Skype, WhatsApp and Facebook Messenger for their communication.

While it did not mention the figures, the TelEm Group announced in a press release on Sunday that the company made a “healthy profit” last year despite dropping local and international call rates and the widespread use of “free” calling services in St. Maarten.

TelEm Chief Financial Officer (CFO) Helma Etnel announced the profit figure to the company’s staffers at a general meeting at the Belair Community Centre on Friday.

Etnel said the revenue was the result of the combined efforts of TelEm Group management and personnel in all divisions despite a significant drop in revenues for the year 2015. “So while we were getting less money in, we were very conservative with spending and using what we had much more efficiently,” said the CFO.

Etnel said the figures could not have come at a better time to boost the morale of personnel, with many negative things being reported about the company in the online and print media – a development that the CFO said she regrets.

She urged personnel and managers not to dwell on these negative reports, but to remind themselves of all the positive things they have done over the past several years to make the company viable and to continue to provide jobs for St. Maarteners and services for the country.

“We have succeeded in maintaining a majority market share in a very competitive environment,” she said. “We have shown that we run a tight ship with documented proof that we have our house in order. We continued to be transparent in our operation with a top-management layer that makes us a leader so far as integrity and high ethical standards go.”

TelEm staffers were also informed that the company scored over 95 per cent on compliance with the Corporate Governance code of St. Maarten.

“This is all evidence of the good work that have been carried out by Management and Staff of TelEm Group in recent years,” continued Etnel.

She said the profit made in the past year is quite remarkable at a time when telecommunication revenues and rates are plummeting at an alarming rate globally and locally due to free messaging and calling applications such as WhatsApp, Skype, Facebook Messenger and Facetime. The CFO, however, warned staff that they still have to meet some serious challenges this year to meet customer expectations for uninterrupted voice and data services and more affordable prices.

“We listen to our customers and we are fully aware of the challenges we are facing, and improvements that need to be made,” said Etnel.

The CFO believes TelEm Group is one of the best corporate citizens on the island. “Thanks to the board, management and staff, we have together developed a company that spends over NAf. 50 million each year in the local economy by payment of taxes, providing salaries to workforce consisting of 95 per cent locals, utilising many local contractors and payments for products and services from our very own local business, etc.

“We have also provided for the community with many sponsorship programmes and contributions, invested a lot in our carnival product and we can therefore state that TelEm is a major economic contributor and is one that we should be proud of with many good things to showcase over the past several years.”

The CFO believes that TelEm Group and its subsidiaries are great companies and true assets to St. Maarten. “It is only fair to our staff therefore, to remind the general public that a lot has been achieved by the board, management and staff for close to seven years since the company has been running without a CEO with the departure of the last named CEO Mr. Pieter Drenth, close to seven years ago.”

Looking ahead, Etnel said plans are already being enacted to improve the customer experience level, and to comply with Quality of Service standards. “TelEm is aggressively expanding its Fiber Optics network to be able to deliver high-speed internet services to households and businesses. We are also in the process to upgrade our mobile network to 4G LTE, allowing Mobile users to utilize more high speed data services.

“While we are still in the process of making these large investments to improve our core networks, we are proud that we are still rightfully chosen by customers as the number one telecommunication provider for two years in a row. A great recognition that we are following the right path,” she said.

Speaking during and after the general meeting about her own future position within the company now that the Shareholder has named two possible choices for the vacant position of CEO, Etnel said: “I am quite honestly proud and happy to be CFO of the TelEm group, and I will support any CEO that will be appointed to this company by the supervisory board and shareholder, as I always did in the past. I will continue to work on improvements of our business operation.”

The highlight of Etnel’s tenure at the head of the TelEm Group Management Board was the successful implementation of the company’s restructuring process. “It was a very complex job that previous CEOs could not do or refused to handle because of the risky nature of such a sensitive assignment and the consequences that might have been involved.

“We have negotiated at that time with the union for a long-awaited Collective Labour Agreement and social plan that preceded the execution of a complicated restructuring process, implemented a complete new organisation with new jobs and transferred staff peacefully to their new jobs.

“We were really able to partner with the union and staff and execute something that was needed to save this company. Through that process we saved TelEm from bankruptcy and the company is currently financially healthy and viable because of that painful, but very necessary, step that we took as a united team,” Etnel noted.

Asked what she personally wants for the company now, she said: “I want success for TelEm so that we can continue to provide a living for the close to 150 families that depend on the company and the many businesses that depend on TelEm. I want a state of the art mobile and fixed infrastructure for the island and offering of reliable services to our customers at affordable rates knowing that this is a crucial requirement to stimulate economic growth and development of a nation, and much needed for further enhancement of our tourism product.”

“To my belief, the supervisory board, management, staff and union can be very proud of their contribution in a significant way toward laying a foundation for a profitable and sustainable Telecom company with a solid infrastructure for the island.”

She hopes that by stating the truth she will give a measure of assurance and comfort to staff and the many stakeholders of the TelEm Group in the knowledge that St. Maarten has a great company in TelEm whose personnel will continue to work diligently towards further improvement of services to the company’s valuable clients, it was stated in the press release.