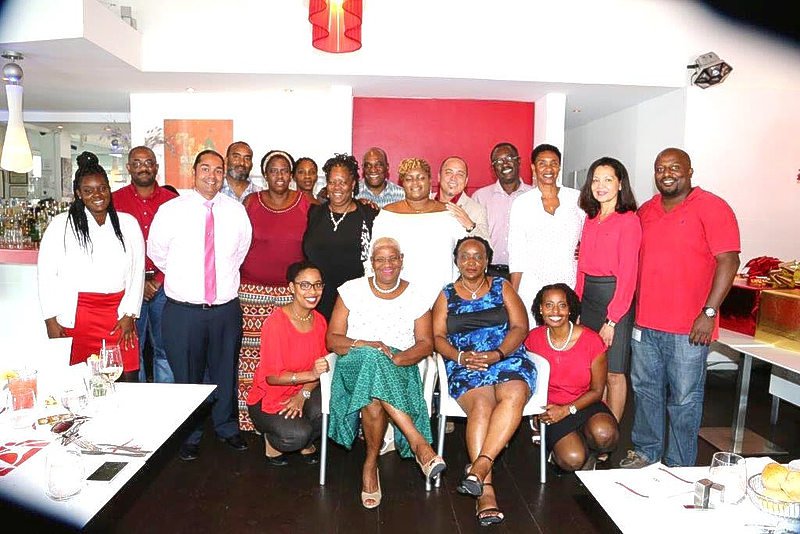 SIMPSON BAY–The TelEm Group honoured several of its long-serving employees as well as its retirees during its annual jubilee celebrations held at IZI Restaurant last Friday.

Honoured were employees who will be going on pension as well as those marking 20, 25 and 35 years of service in the company. A total of nine long-serving staff were present to take their place in the spotlight to listen to tributes from their colleagues, managers, directors, friends and members of their family present. The highest accolades were reserved for this year’s retirees Cherrelyn Jermain and Margarita Hodge. Jermain went on retirement earlier this year, and Hodge will be going on pension in six weeks.
Chief Commercial Officer (CCO) Brian Mingo and Senior Account Manager, Lucrecia Lynch thanked both ladies for their outstanding service over the years and especially for their dedication to customers of TelEm Group.
Both were advised not to be strangers of the company that they have in worked most of their lives, with assurances that both would continue to be ambassadors for TelEm Group while they enter new phases of their lives.
The ceremony began on Friday afternoon with an introduction to all the veteran workers from Chief Financial Officer (CFO) Helma Etnel. Referring to honourees by name, Etnel praised each for their respective contribution, thanking their families for allowing them to spend most of their working lives in the presence of their colleagues while doing company work.
“You have all made outstanding contributions and continue to make outstanding contributions to your company, and on behalf of Management and the rest of your colleagues, I personally want to thank you all for those contributions,” Etnel said.
TelEm Group’s Technical Department was well represented by 35-year veteran worker Alberto Carty, who was described by his manager Julian Lake and also his director Eldert Louisa, as a soft-spoken and gentle worker who has played an important part in building the technical infrastructure at sister company Smitcoms, and most recently also at TelEm Group.
Manager Customer Relations Veronica Browne could not be present at the ceremony; however, her written words of praise to honour for employees Careen Jones (25 years in service) and Lead Customer Relations Representative Suraj Ramdas (20 years in service) were read out and greeted with warm enthusiasm from those attending the ceremony.
Also honoured for 20 years in service were Mingo, Remigius Macaya, recently promoted to Technician Level II in the NOC centre and Lead Customer Service Representative Doris Richardson.
Rounding-off the list of long-standing staff for the year was Billing Officer Luanne Murray with 25 years in service, all of which has been in the Billing Department with one short stop in Customer Relations.
Everyone thanked the Human Resources and Development team for another “smooth ceremony” and for ensuring the company’s cherished workers are once again recognised for their contributions and efforts over the years,” TelEm said in a press release on Tuesday.