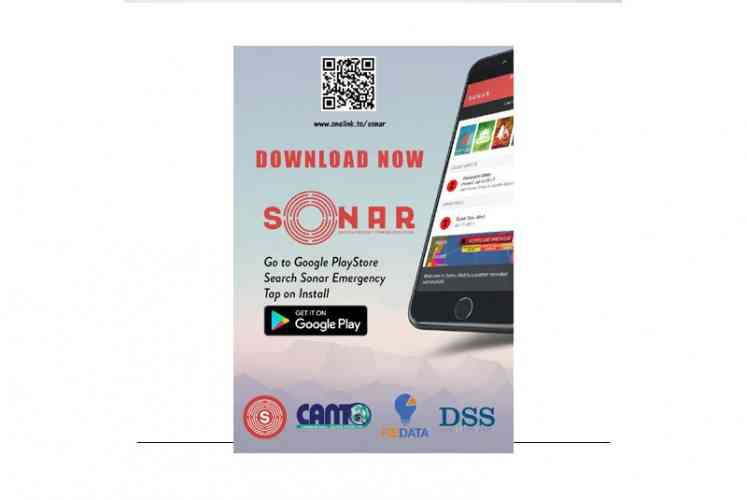 PHILIPSBURG–TelEm Group is joining other telecommunications companies in the Caribbean in the testing phase of a mobile disaster management app called Sonar that could soon hit the global market, TelEm said in a press release Thursday.

The app can make it possible for general populations in the region to receive up-to-the-minute information about upcoming storms and natural disasters, view weather patterns and obtain various information from government and disaster preparedness offices, including information about shelters and their state of readiness.
It also advises on recovery efforts after a natural disaster by sending targeted information before, during and after a major incident. Both users and Government can benefit from another feature of the Sonar app that focuses on the recovery effort following any natural disaster, with contact information for donations and other supplies that might be needed at the time.
The developers believe that their app is designed for governments and national disaster organisations to serve the population.
The disaster organisations can make use of its additional features, including a Command Centre dashboard to centralise all communication centres, customisation of the app to conform with local weather systems, call centre management to assist the public, and the ability to not only add new shelters to a list, but also to inform the public about the occupancy of these shelters in real time.
Sonar is the creation of LXJ Code Belize, a team of young software developers based in Belize. The team scooped top prize in the Caribbean Association of National Telecommunication Organisations (CANTO) annual Hackathon CODE3 software development competition last year. The contest is open to software developers from all CANTO member countries.
Following months of development work with regional entrepreneurial body PieData and the Caribbean Emergency Disaster Management Agency (CEDMA), the SONAR team conducted additional trials in their home country Belize. Last week, during CANTO’s 34th AGM in Trinidad and Tobago, the team launched the latest test version of the SONAR app that CANTO’s members will now be using in a controlled test.
TelEm Group’s Chief Executive Officer (CEO) Kendall Dupersoy and Chief Financial Officer (CFO) Helma Etnel both attended the presentation in Trinidad and Tobago and signed up as a testing partner.
“We can see how an application of this kind can be a very useful tool for our own government’s disaster management team and also for the general public because of the two components of the app. One component features monitoring by the disaster management team, while the other has push notifications that users of the app can utilise to stay informed at all stages of a disaster event from preparation to recovery,” said Dupersoy.
He added that TelEm Group and other companies will test the app and report back to Piedata so that the development team can carry out any fine-tuning before final presentations are made to governments and disaster management organisations throughout the region.
The developers hope to take their work global by customising the app’s features for different geographical areas and globally-specific natural disasters.
Etnel said she is very excited and proud of TelEm Group’s involvement in this testing phase. She believes the success of this regionally conceived and developed app can have a significant impact on the way potential disasters are prepared for, tracked and managed, to the benefit of St. Maarten and entire populations and economies in the Caribbean and, later on, farther afield.
“We should be very proud that such an app is being development in our own back yard,” said Etnel, who sees this as encouragement for St. Maarten’s own developers to build their own apps for submission to future CANTO CODE competitions.
“I recall that in St. Maarten we were also slow to enter various CANTO competitions at the start, but once we started competing, it seemed like St. Maarten was winning one of the top prizes quite often. And so, I believe it will be for future Hackathon CODE coding contests,” she said.
The TelEm Group executives will be speaking to Government’s local disaster management group about the new app and its possibilities once their own tests are completed and they receive the nod from the developers, CANTO and PieData to take the current tests to the next phase.