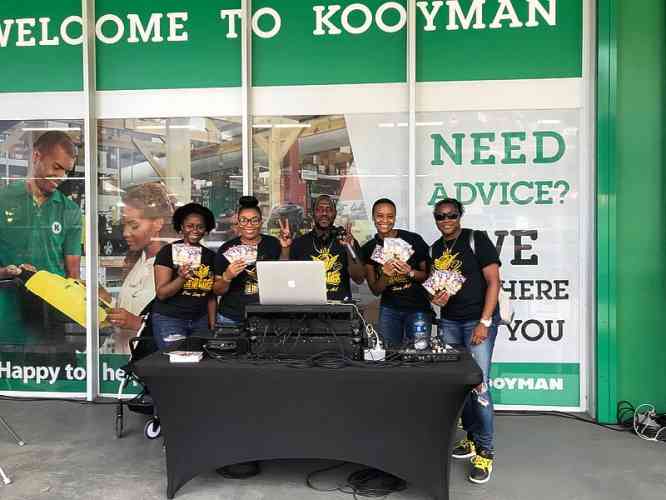 Night of the Hit Makers team during a ticket sale outside Kooyman on Saturday.

POND ISLAND–TelEm Group is making a limited edition US $10 TelCell Night of the Hit Makers phone card available to the public and card collectors in a new campaign launched Thursday.

The phone cards are available exclusively from TelEm Group’s main office on Pond Island and also at the TelEm Group branch office in Simpson Bay.

This year’s special 50th anniversary of St. Maarten Carnival also called for something special, and the Marketing and Sales Department came up with the sale of a special $10 phone card to mark the sell-out show on April 26.

Subscribers who purchase the card will not just receive a colourful reminder as a 50th anniversary keepsake, but they all get a chance to win an iPhone or a Carnival costume to fete with TelEm Group’s colourful and dynamic Carnival troupe in the Grand Parade.

TelEm Group Manager of Marketing and Sales Grisha Heyliger-Marten says the phone cards promotion is just one of the many campaigns being run by the company during this year’s Carnival 50. She said as a main sponsor of the St. Maarten Carnival each year, management and staff are keen to promote their presence in all aspects of the island’s premier touristic and cultural event.

“We are having fun, our staff are having fun and we want our subscribers, visitors to the island, and the public generally to also have fun with us as we make this one Carnival that we will remember for a long time,” she said. There will be other prizes during the $10 Hit Makers phone card promotion, including a Sim Card and $50 call credit.