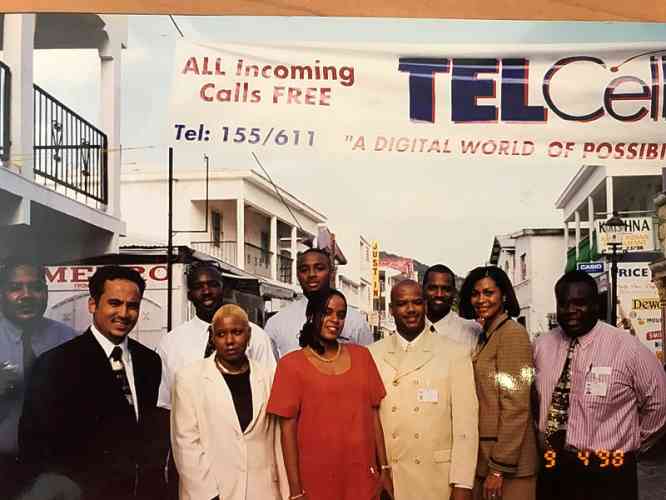 The late Network Engineer Earlston Thomas (right) with some of the original pioneering TelCell mobile team at the launching of St. Maarten’s first digital mobile service in 1998.

POND ISLAND–TelEm said on Sunday it is mourning the sudden passing of its Network Engineer Earlston Thomas, who passed away early Sunday at the age of 48.

Management and colleagues have expressed shock at the news of Thomas’ untimely death after being rushed to hospital on Saturday.

Family and friends said he had reported some discomfort Friday, which necessitated a visit to the hospital where he was seen and then sent home with medication. Hours later his condition deteriorated and he was returned to the hospital Saturday night and pronounced dead early Sunday morning.

TelEm Group Chief Executive Officer Kendall Dupersoy said in a press release on Sunday there has been an outpouring of calls from colleagues in the TelEm Group family and also from the general population expressing sympathy on Thomas’ passing.

“We cannot express in words just how sorry we are to have received this news today,” Dupersoy said.

He paid tribute to the Network Engineer for being part of the original team who pioneered the building of the first digital mobile service in St. Maarten. Until then, all systems were analogue with customers paying for calls made and calls received.

“Earl was responsible for overseeing the placing and installation of cell sites needed for St. Maarten’s first digital switch, which also signalled a major evolution on mobile technology at the time. It also brought with it an end to the days when mobile subscribers paid for outgoing and incoming calls, making TelCell an instant hit with customers at the time,” the CEO said.

He said Thomas had been a veteran engineer in the company, and he had only recently warmed to a new lease of working life when he was named to an elite “Magnificent 7” team of technicians and engineers charged with steering TelEm Group’s Fibre-to-the-Home Project in a new direction.

“Earl was very enthusiastic and genuinely wanted to show what he could do, especially after successfully expanding bandwidth services to the Festival Village in time for Carnival last year, and also after successfully improving telecommunication services at the Harbour Facility,” Dupersoy said.

Chief Commercial Officer (CCO) Brian Mingo, with whom Thomas developed mobile provider TelCell from the ground up, said he made an outstanding contribution to telecommunication services offered by TelEm Group, noting that the engineer’s skill and engineering ability will be missed.

Chief Technical Officer (CTO) Eldert Louisa offered his own message of condolence to Thomas’ family and friends for his sudden loss, also pointing to his technical contribution to the company over the years. He said Thomas also scored a first when he spearheaded the installation of the very first Global Services Mobile (GSM) mobile network in the Caribbean in St. Maarten. “Mr. Thomas was confident in his knowledge of the company’s systems, having helped set many of them up. Only last week, I had cause to congratulate him on an action he had taken, causing me to think he was very enthusiastic about tackling some new challenges that he was involved in. Mr. Thomas was a very intelligent engineer with knowledge that will not be easy to replace,” Louisa said.

“We are going to miss a great man and a great worker, who always wanted everything he did to be excellent, especially when it came to the company and customers,” close personal friend and colleague Percival Cocks said.