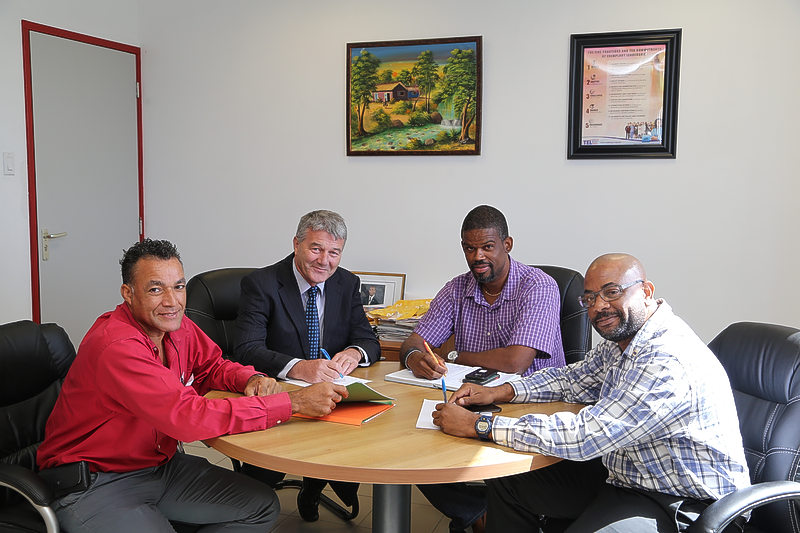 POND ISLAND–TelEm’s technical officials currently busy with plans for a new fibre optic infrastructure for St. Maarten are predicting a major workload from early 2017, when some “very important work” is scheduled to begin on the project.

TelEm Group’s fibre optic project, in particular running fibre to every home on the island, is being funded with a loan from the European Investment Bank (EIB), with TelEm Group as the driving force.

Once in place, the fibre infrastructure will revolutionise telecommunications on the island as we know it, particularly when it comes to broadband services, TelEm said in a press release.

E-commerce, tele-medicine, IPTV (Internet Protocol Televison) and e-learning, are just a few of the possibilities being mentioned, as well as the all-encompassing “Internet of Things” where technology is promising to monitor one’s home, check their car and tell them when it’s time to visit the doctor – all with the availability of reliable fibre optic connections.

Planning, designing and installing the new infrastructure is expected to provide many jobs for subcontractors and other service providers in the local community over the next two years, but it is the potential to create many thousands of jobs from the wider commercial use of the fibre optic infrastructure that is creating the most buzz,” TelEm said.

“A lot of preparatory work is first required before TelEm Group and its customers can start to make good on the promise of a revolutionary fibre optic telecommunication network that spans the entire Dutch St. Maarten.”

A lot of work has also been done with TelEm Group staff in assessing what is presently in place and the comprehensive plan of action that is required to deliver the high-standard of installation expected, the company said.

According to TelEm, a very important phase began last Friday, when the first part of a tendering process was made open to the public. The public bid is a specific requirement of EIB that it has laid down as a pre-condition to financing the fibre project for St. Maarten to strict international standards.

“Managers and department heads have been told what to expect and also have been informed about the different roles their respective departments will play in the overall project and everyone realises there is a lot of work to be done and that staff will be very busy in one way or other hence the insistence of the team that information regarding the plans and their execution is passed on to staff regularly to guard against communication bottlenecks that can affect productivity and stall the project.”

“We are insisting that a major component of the project is the creation of jobs for locals, so we have included not only the provision of labour itself, but also for training which will be important for continued employment in the future,” TelEm Chief Technical Officer (CTO) Eldert Louisa said.

Louisa is looking forward to good cooperation with visiting consultant James Dowling, assisting with the project management, so that the project can gain its own traction and create much excitement in the community. He is also pleased with the involvement of Outside Plant Manager Marco London and Manager of Planning and Engineering Jed Carty, who are both playing instrumental roles alongside the visiting consultant so that there will be continuity once his scope of work has ended.

According to Louisa, managers have been receiving regular updates on the different stages of progress on the project, noting that the same managers can provide many of the answers to questions personnel may have at this time.

“Staff involvement and contribution for the next two years will be paramount. Not only because of all the knowledge that can be learned but also because of the opportunity to be involved in a cutting edge technology that will change and revolutionise telecommunication services on St. Maarten very, very soon,” said Louisa.

The CTO promises regular updates internally and also to the public to keep everyone up to date with the technical progress and milestones of the project installation and everything is put in place to hand over to the commercial side of the project. Louisa has thanked other departments in the company that have assisted in ensuring that the legal and financial aspects conform to company policy where it comes to the tendering process itself.

Work will begin on a working demonstration model of the fibre network, complete with table-top box, router and cabling in the public area of the main building. “We hope that by seeing a working demonstration, testing the speed for themselves and seeing how smooth TV viewing can be, customers will be as excited about the new rollout as we all are,” Louisa said.